Home » Getting ready for UPSC with the top-recommended magazines

Getting ready for UPSC with the top-recommended magazines 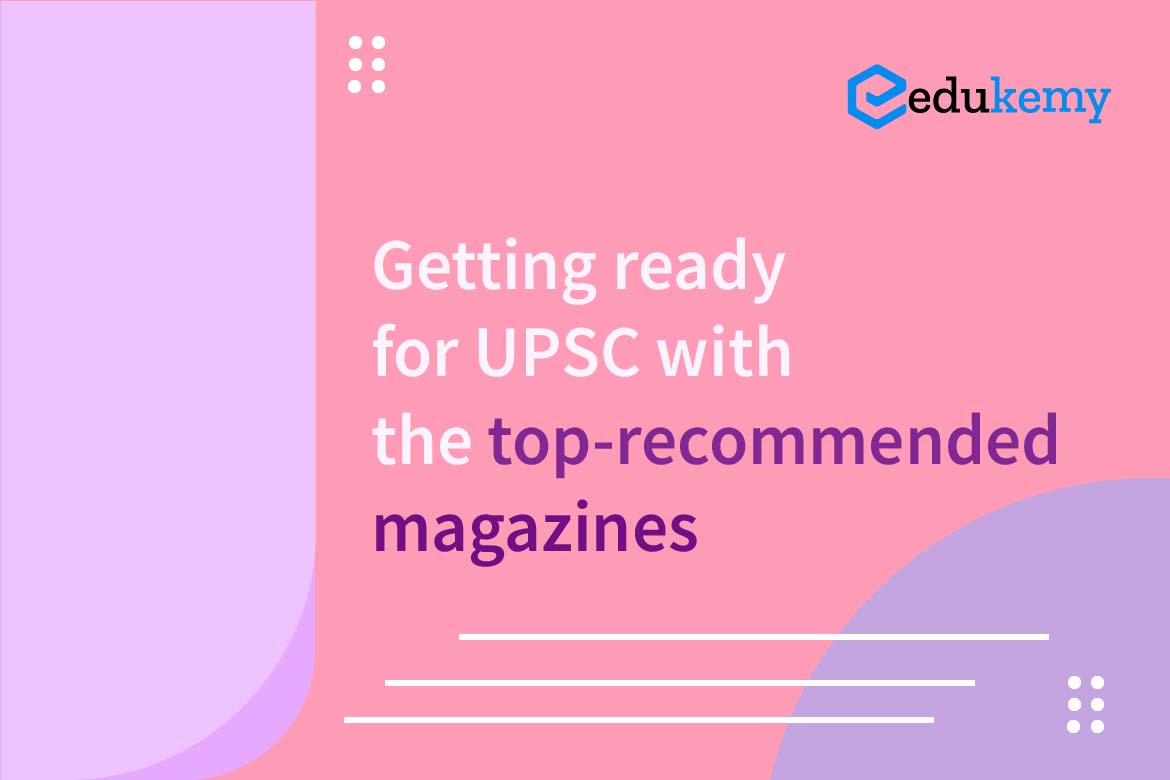 Current affairs are a very important aspect of the preparation for the IAS exam.

Every aspirant must keep themselves updated with the recent happenings in the world.

These magazines and newspapers play an important role in the preparation, most of the content is available in the newspapers themselves but magazines provide an edge to each piece of information.

Newspapers are a brilliant source of information and facts on the other hand magazines are written and edited by various authors and editors thus providing a wide range of ideas and opinions.

Given below article is all about how to read newspapers for preparation and which are the important papers to follow. (link)

Why are monthly current affairs magazines considered to be so important?

Good magazines not only are provided facts and editorial columns from various professionals but also.

How can I prepare for the UPSC exam using a newspaper or a magazine?

# The answer to this debate is both magazines and newspaper is important for preparation and leaving either of them is not a very wise decision.

Let’s get a brief look into the recommended magazines for UPSC.

Yojna is a monthly magazine that publishes the government’s point of view on socio-political matters.

This magazine provides various points for essay writing as well also provides valuable content for the Mains preparation as well.

This magazine is recommended by most of the toppers and especially by the last 3 years toppers.

It is said that 1-2 essays come in the mains paper from this magazine.

Yojna magazine is available in 13 languages including English, Hindi, Assamese, Telegu, and many more. This magazine also covers general topics such as agriculture, federalism, budget, etc.

Though these magazines provide an edge to your preparation and so this should be only started after compilation of the NCERT books and the source materials.

This is published by the Ministry of Rural development, this is a monthly journal and provides valuable content for the IAS exam.

Kurukshetra principally deals with rural developments which hold a valuable weightage in the exam. This magazine also helps aspirants prepare for public administration.

Also according to the recent trends of the exam, it is noticed that the board is putting more emphasis and focus on the environment and rural development which automatically puts this magazine in an important spot.

This magazine is basically a social science journal and contains many technical analyses of the contemporary world.

This journal though needs a very deep level of understanding due to its technicality but at the same time provides valuable resources for the IAS exam.

The weekly economics and political edition contain articles on a wide range of topics such as:

In addition to this, it includes comments and opinions from various editors and professionals, which provides a wealth of information and helps to critically examine the topic.

How to retain and remember all the current affairs and events?

How to read newspapers for beginners

How to read NCERT for the IAS preparation https://edukemy.com/blog/know-how-important-ncert-is-for-your-upsc-preparation/)

Is one year of current affairs enough for the UPSC exam?

Which magazine is best for government policies and social events for UPSC preparation?

The monthly policy review by PRS provides valuable information and updates on all kinds of government policies and recent bills passed by the government.

Pt365 is basically the cumulation of all kinds of current affairs in the form of videos.
This is published by VISION and is a compilation of affairs for the whole month.
They also publish a yearly version as well.

Which magazine is best for the UPSC prelims round?

Chronicle and Vision current affairs are more than enough for the prelims if studied properly.

What are some Hindi magazines for UPSC preparation?

Yojana
Pratiyogita Darpan
Kurukshetra
These magazines are topper recommended and are available in Hindi as well as in English.

Which institute has the best current affairs magazine for UPSC?

Yojana magazine is generally considered to be one of the best and most reliable magazines for the preparation of UPSC.

Preserving the precious – On groundwater use: The Hindu

How to prepare World History for UPSC

How to do the analysis of the UPSC syllabus and...

How many hours should I study...

How to Prepare Compulsory Language Paper...

Which stream is best for the...