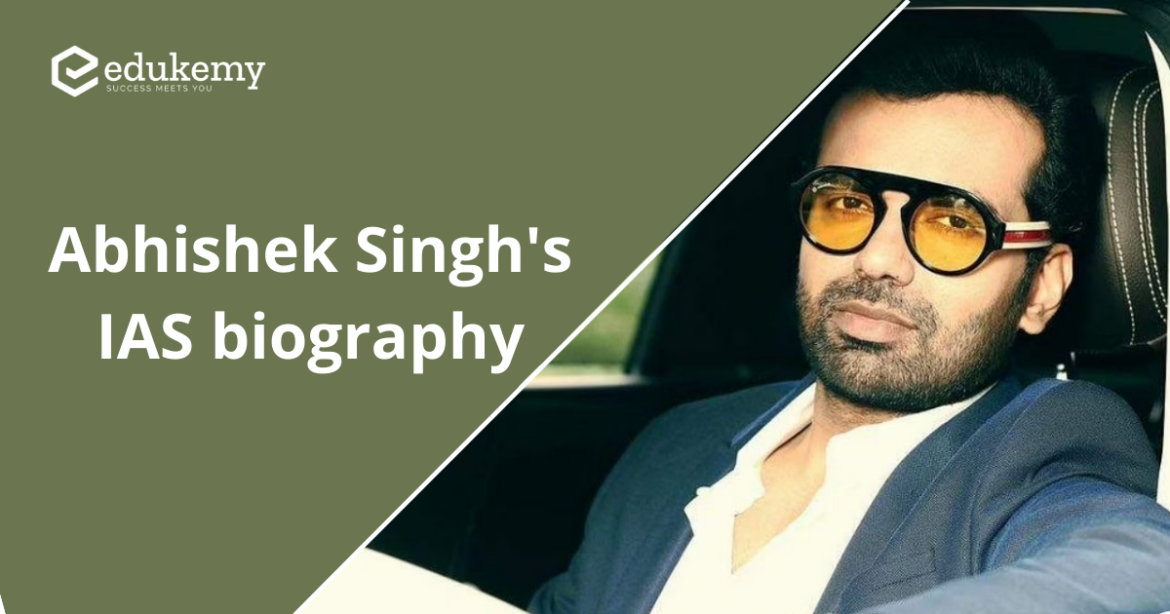 UPSC is one of the toughest exams in the country and aspirants have to prepare for months to crack this exam.

After achieving the position as well many IAS or IPS officers choose to do something else as well.

Likewise, Abhishek Singh is an exceptional IAS officer who decided to take up acting after completing his IAS training.

The most astounding fact is that he took up his acting passion, while he was serving as an IAS officer.

IAS Abhishek describes himself as an optimistic achiever.

He believes that if someone believes in themselves then anything is possible to achieve.

Firstly he got the inspiration of being an IAS officer from his father.

His father is a retired IPS officer and Abhishek always admired him for his work and personality.

Being raised by a father who served the people and got so much respect, Abhishek decided to follow in his father’s footsteps.

Current IAS Abhishek had a very rich childhood and his parents never forced him into anything and motivated Abhishek for all sorts of activities.

From his very childhood young Abhishek wanted to serve the nation like his father.

His family not only supported him but his father personally mentored him as well in his journey.

While his preparation phase, in an interview Abhishek Singh also explains how he was in a dark phase.

Mr.Sungh told the interviewers that while he was preparing for the IAS exam, he went through a very bad breakup and was in severe depression for months.

Later retired IAS Abhishek says that “problems will be there, but one should not shift his focus and change their properties!”

So Abhishek Singh got out of his depression and continued his preparation for UPSC without wasting much time.

“When destiny has its own plans”- former IAS Abhishek Singh

The acting was something Abhishek never imagined that he will be able to do.

Though he was always very optimistic and believed that anything and everything is possible but as he did not belong to any acting background like this and his family background was more leaned towards serving the nation he never had a thought of acting for one in his life.

Until last year Abhishek Singh did not even have an Instagram account because he never shifted his focus other than serving the people.

Here’s how IAS Abhishek got into acting!

One fine day, when destiny was about to change everything in Abhishek’s life, he went to Mumbai the city of dreams.

There Mr.Singh went for some little did he know what was waiting for him.

For a very long time, IAS Abhishek knew Mukesh Chhabra a well-known popular casting director, they both met in Delhi.

Both of them were good friends.

When Abhishek was in Mumbai, Mukesh invited him to join him at his house regarding some important discussions.

There at Mukesh’s house, Netflix team was already present and were there to work on the Delhi crime.

At that time IAS Abhishek was also posted as the Deputy Commissioner in Delhi so Mukesh thought that he could be a great help to get some insights into the crimes that were happening in Delhi.

But with some misunderstanding and confusion, the people from Netflix thought that Abhishek was an actor, they also asked Abhishek about his previous works and projects.

Well, the confusion was cleared by Mukesh Chabra at the very point but this took a turn of events for Abhishek.

The Netflix team at that time was looking for someone to play the role of the IAS officer in Delhi crime season 2.

At first, IAS Abhishek was shocked and was not ready for this, the Netflix team found him to be the perfect fit for the role and convinced Abhishek to read the script.

IAS Singh was a bit hesitant because he did not have any prior experience and suddenly giving an audition for a role was something he never expected.

After he was convinced to give the audition and read the lines the Netflix team was very much impressed and decided to cast him as the IAS officer in Delhi crimes season 2.

This turned out to be one of the best decisions and Abhishek Singh was one of the most genuine actors on the whole set and was praised for the role he played.

“Being an actor is a whole new experience”- Abhishek Singh

Advice to all the young aspirants!

Currently, IAS Abhishek Singh is posted in Delhi.
Not only this he has also starred in several music videos as he later got to know that acting was something he dearly enjoyed and is passionate about.

Is Abhishek Singh is still serving as an IAS officer?


Yes, he is still serving as an IAS officer though he is also following his passion for acting and has starred as a lead in many music videos by popular musicians like Badshah and Jubin Nautiyal.
Later in February 2022, he left the Indian Administrative service to focus more on his acting career.

Abhishek Singh is married to IAS Durga Shakti Nagpal, she was able to be selected in the Indian Revenue service but she chose to take the UPSC exam for the second time and was able to clear it then.

How should I start my UPSC preparation?

How to deal with Stress during...

You need to avoid some mistakes...