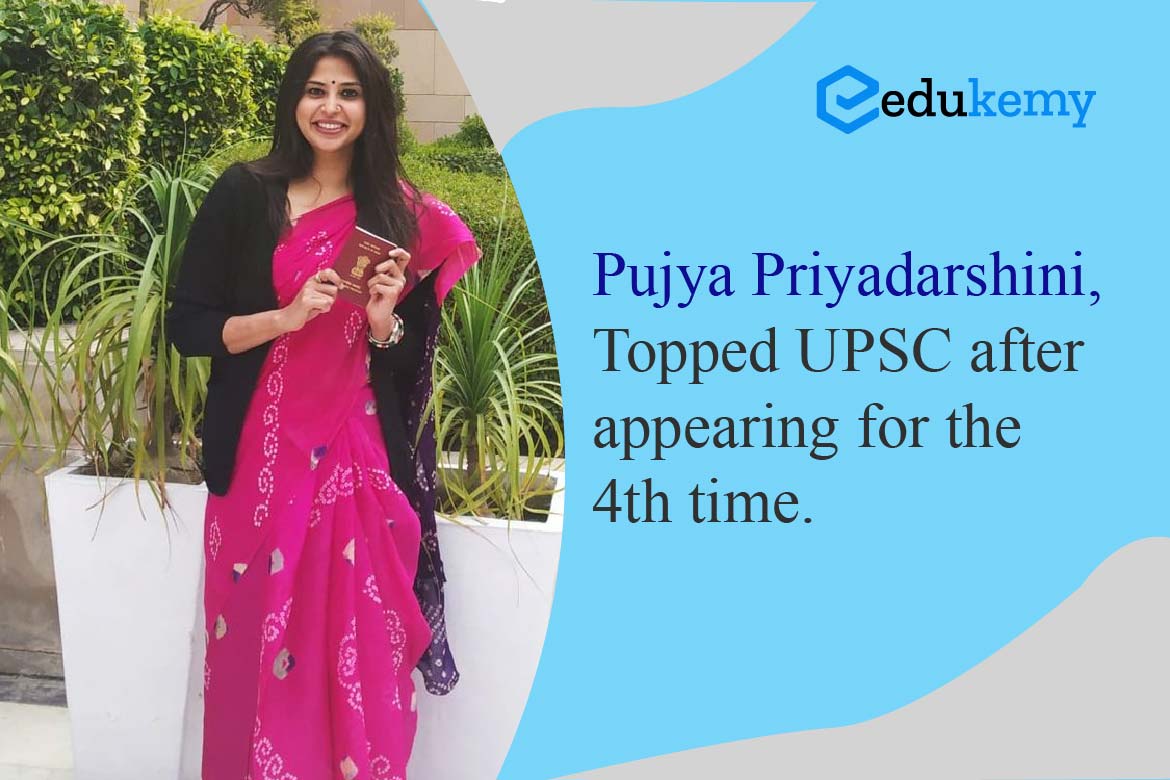 “If you are a UPSC aspirant prepare for the worst, that’s the best and first strategy because when will failure hit you, you will never know and that might break your confidence most of the time but the ones who show the courage to stand up and face the failure again, wins in the long run” this was pretty much the life strategy of UPSC topper Pujya Priyadarshini whose journey is one of the most aspiring one and every aspirant who are trying hard and are still failing must get to know this incredible woman.

The educational journey of Pujya Priyadarshini.

Pujya Priyadarshini always knew she had something big to do but was figuring it out all through her former educational journey.

Cracking UPSC was not easy!

Pujya Priyadarshini cleared her exam on the 4th attempt which wasn’t an easy journey and took almost 5 years to crack the exam.

Pujya started her journey back in 2013, this was her 1st attempt and she wasn’t able to clear the prelims as well, though this year she was preparing for her final year B-com honors as well, and tackling both the preparations wasn’t proved to be a very good decision for her.

After this, she went to New York for her master’s and came back in 2016, when she wrote her UPSC paper for the second time this time she was able to do better than the last time and was able to go up to the interview round and was placed in the reserve list but sadly this time also she wasn’t able to make it. This was one of the toughest years faced by Pujya and she also admits it in many of her interviews.

In the year 2017, this time also Pujya gave the exam but this time was worse than the last time as she did not clear the prelims round, this was very tough for her to take and this time she was on the verge to quit !!

The frustrating and ever tiring preparation journey seems never-ending but she was hanging with a string of passion moreover, her family members were also tremendously supportive of her and motivated her endlessly and this was also one of the biggest reasons that she gave herself one more chance in the year 2018.

And to everybody’s surprise in 2018 not only Pujya was able to clear the prelims and mains but also she bagged the AIR 11 in that year and was able to achieve her dream and passion of being a civil servant.

How to stay motivated after multiple failures in UPSC?

This shows that keeping a second option is not that bad and depends on the preference of the individual and has completely nothing to do with the success.

What was the optional subject of Pujya Priyadarshini?

Sociology was the optional subject of Pujya Priyadarshini.

Where is IFS Pujya from?

Pujya Priyadarshini belongs to the city of Delhi and there only she completed her graduation.

Yes, both Pujya Priyadarshini’s parents belong to civil service and from there only she got the motivation and passion to be a civil servant.

Is Pujya Priyadarshini IFS or IAS?

Priyadarshini bagged the rank of 11 in 2018 and is currently serving as an IFS officer.

Making NCERT Notes for the UPSC

What are the Civil Services? Why...

How to deal with Stress during...

Secret to Ace CSAT for UPSC...