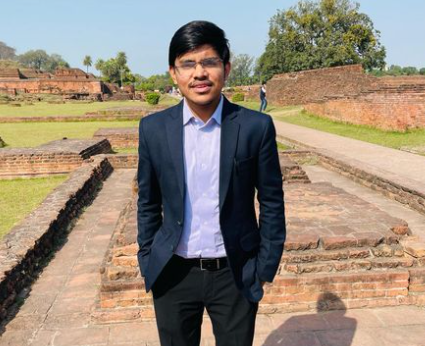 Pradeep Singh is not only the 1st rank holder but he also proved that one can not only crack UPSC CSE but also top while managing a full-time job in the government sector. This is the inspiring and motivating journey of IAS Pradeep Singh.

The path to success is never easy, and in India especially all the competitive exams like NEET, JEE, CAT have ample students who are competing each day for those few seats available, and among all the exams UPSC is one of the exams which is considered to be the hardest, Each year around 11 lakh – 12 lakh students apply for the prelims and around 15k – 16k students appear for the mains and among them, only a handful of student can fulfill their dream.

Pradeep Singh was one of the many, aspirants who dreamt of becoming an IAS officer, but not always life goes as planned.

Failure is never the End

2019 UPSC All India Rank 1, Pradeep Singh has been a huge inspiration, he has been the epitome of determination and being rigid to what he believed made him reach success.

Topper Pradeep Singh not only failed in his 1st attempt but his 2nd and 3rd attempt as well, but never lost his faith in himself and believed in his capacities, and thereafter was able to become the all India rank 1 in the year 2019.

What was Pradeep Singh’s rank in his 3rd attempt?

Pradeep Singh appeared for his 3rd attempt, in 2018 and got the All India Rank of 260 and did not hesitate to take the position of IRS officer.

Can I crack UPSC while doing a full-time job?

Well if you determine something then definitely you can, In 2019 Topper Pradeep Singh proved that if you work hard and have focus and know what are you aiming for you can do that, he did not leave his full-time job, while preparing for UPSC like most candidates. Though it was difficult and exhausting, he also got demotivated and tired sometimes but then his father used to motivate him a lot, Pradeep Singh also quoted one of his father’s saying that SELF MOTIVATION is the key, and if you are self-motivated then what others say will never matter.

The 2019  IAS Topper Pradeep Singh is from Jaat Community. He was born and raised in a family of farmers. His father, Sukhbir Singh Malik is an ex-sarpanch of Tewari village in Ganaur of Sonepat district in Haryana which is also his birthplace, and his mother Sheela Devi is a housemaker. The IAS topper’s siblings are also highly educated. His elder brother, Ajit Singh is a mechanical engineer who is currently working in the insurance sector and his younger sister Manisha is a postgraduate in Mathematics.

Pradeep Singh Malik was a very determined student since his school days. He studied in a local Government school in his village till his 7th standard and then he went to Shambhu Dayal Modern School in Sonipat, where he studied from 7th to 12th standard.  He completed his graduation from Deenbandhu Chhotu Ram University of Science And Technology (DCRUST), Murthal with the degree of Bachelor of Engineering in Computer Science in 2012. After completing graduation, Pradeep took coaching for the staff selection commission. He gave the SSC CGL examination and was appointed as an Income Tax officer in 2015. He worked as an Income Tax Inspector in Delhi for four years from 2015 to 2019.

But he did not stop there, his aim was something more so he worked harder than ever and gave the UPSC exam. His dream to be an IAS Officer became a reality on 4th August 2022 when Pradeep Singh was declared the Topper of the UPSC Exam 2019.

UPSC topper, Pradeep Singh has always been linked to one or the other government service and served his best for the betterment of the nation. After Graduation, Mr.Singh took coaching classes to appear for the exam of Staff Selection Commission which is popularly known as SSC, and they’re also he did not fail to get a good position and secured his first job as an Inspector in the Income Tax Department.

But he was unstoppable and never settled for less, he aimed for becoming an IAS officer and did not stop until he achieved it, Not only did he appear for the exams 4 times but also when in 2018 he secured the All India Rank of 260 and got the position of IRS he still appeared for the exams in the next year and secured Rank 1 in the whole country.

The IAS Topper of 2019 quoted that the aspirants must focus more on their writing skills than to pass the main examination and for the interview to pass one must focus on interpersonal skills oneself. He is truly an inspiring character for all the students who are trying to qualify for the UPSC exam. He also mentioned in one of his interviews, “If I can crack the Civil Service Examination, then anyone can crack it.” According to him, one only needs to be focused and have strong determination, With the proper amount of focus, determination, and consistency, the exam can be cracked.”The IAS topper also mentioned that only he/she knows his/her true potential so everyone should work hard and motivate themselves not to quit.

Pradeep’s father supported him a lot during his struggling days. Once he even thought of quitting IAS but his father motivated him not to do so and to keep his patience and continue to work hard which eventually had paid off. He also said Pradeep to not worry about the money and to only focus on himself. Pradeep’s father, Sukhbir Singh Malik did his level best for his son had given him every amount of support required and when Pradeep topped the UPSC examination, he hugged his father first and then said him the result.

At what age did Pradeep Singh crack UPSC?

After the hard work and determination, Pradeep Singh cracked one of the toughest exams in the country and fulfilled his dream, and by the age of 29 after attempting for the 4th time he achieved his dream of becoming an IAS officer.

The 2019 IAS Topper Pradeep Singh thought of quitting IAS preparation numerous times as it was extremely difficult to simultaneously do his job as an income tax inspector and study for the UPSC exam. He felt demotivated quite a lot of times but his father encouraged him to follow his passion instead of quitting. So Pradeep Singh made up his mind to keep himself motivated all the time.

He made very simple yet the most useful strategies to crack the exam. The main thing he focused on was time management and looking after that every hour is utilized well whether it was his work or preparation. Beforehand the exam, the candidates must be well prepared with general knowledge and current affairs. This was Mr.Singh’s prime focus which was to stay updated. All the aspirants must focus on one’s writing skills to score good marks in IAS mains. One should practice forming opinions on both national and international events and diversify his or her level of interests in a way that is benefitted well in the personal interview round.

While Pradeep was preparing for the exam, his focus was on the targeted portions of the UPSC syllabus every day. He used to make targets and completed them, from the beginning he focused well on completing the syllabus with numerous revisions and answer writing practice.

When asked about the ingredients of his success, Mr.Pradeep Singh simply answered that he thinks UPSC is itself a very comprehensive exam with different levels, prelims, mains, and personal interviews, and all of them have a different style of preparation and they should be prepared well individually.

He suggests that for prelims students must focus more on objectives and MCQs and it’s more based on facts and informative data, whereas for the Mains the type of preparation an aspirant must do is different from the previous level of the test. For Mains, the student must practice writing descriptive answers and also focus on building strong opinions and practice placing their words with confidence so that panel gets a clear view of his/her perspective on the paper itself.

How to prepare for the Personal interview for UPSC Exam?

As said by 2019 topper Mr.Pradeep Singh in an interview that in a personal interview there is no particular source or syllabus or any other material to prepare from so you just need to pay focus on your speaking style, personality development, the attitude of talking.

Aspirants must prepare for themselves and work on presenting themselves in front of the panel. Also besides these, getting information about various topics including current affairs, work experiences, educational background, and government schemes, in his year, his interview was focused on International relations, agriculture sectors, etc.

How time management plays an important part in the whole preparation?

For IAS topper Pradeep Singh time management was one of the most crucial things, as he never dedicated his whole time towards his preparation and was already working as an inspector in the income tax department and managing time. He used to study while his lunch breaks, not only this but Pradeep used to do his work in advance so that he could take out time to study, even while traveling, he used to watch videos on events, schemes, etc so that his time is utilized and not wasted.

What are the main sources to stay updated with current affairs?

As shared by our very own Pradeep Singh who bagged the 1st rank in the 2019 UPSC exam, Reading newspapers has been a great help, and also for many topics which are not clear in conventional books, Youtube and other relevant online sources can be used. Mr.Singh mainly used to read Yojna, and Indian Express, and also watch youtube videos.

“Don’t keep in mind that you have to study for these many hours, but focus on the syllabus from the beginning and do not get overwhelmed by the competition. In this exam, there are a lot of uncertainties so take your decisions wisely and lastly keep faith in yourself.”

Mr. Pradeep Sing with his hard work and determination cracks the UPSC CSE Exam on his 4th attempt and also made it to the 1st position.

No, he is not married and he is not seeing anyone as per reports as well.

Is Pradeep Singh IAS or IRS?

It is true that in 2018 Pradeep Singh did get the all India rank of 260 and got the IRS rank but later in 2019 he re-appeared for the UPSC exams again while already being in full-time government service, and topped in all India and fulfilled his dreams of becoming an IAS officer.

Why did Roman Saini, former MBBS doctor resign from the...

The journey from dentist to IPS...