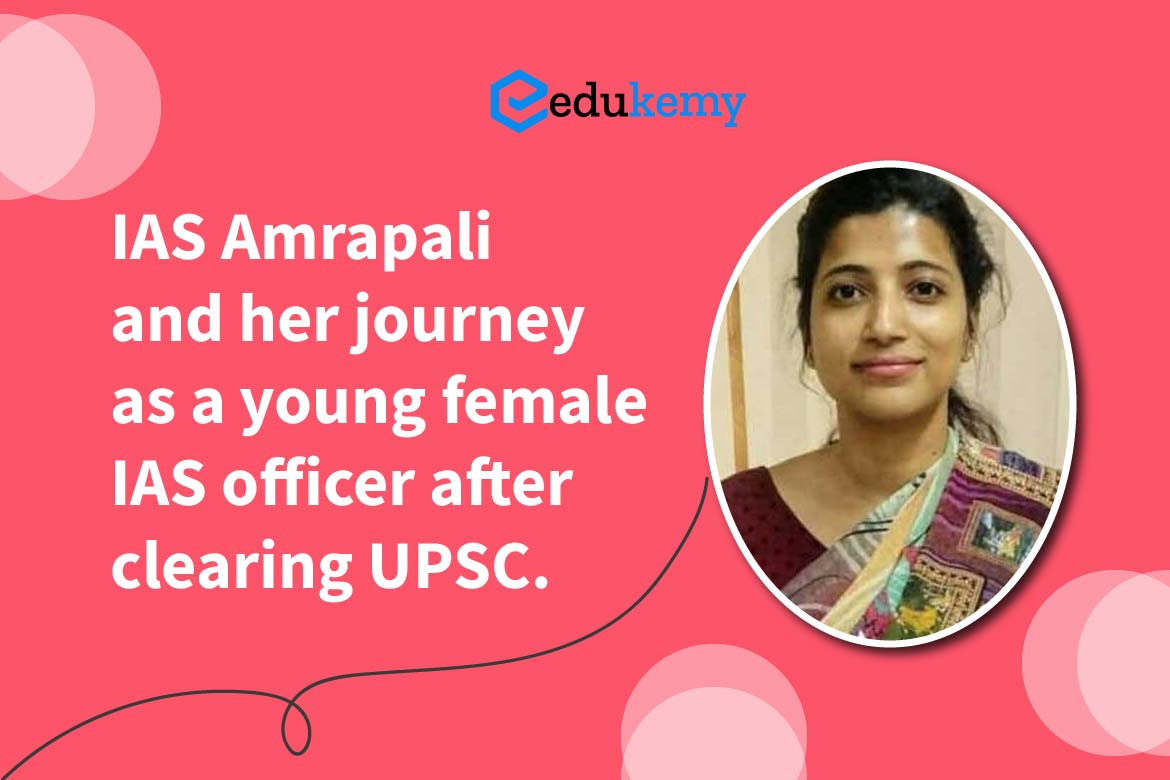 Introduction to IAS Amrapali and her achievements

Every year many aspirants appear for the IAS exam but some of them only get to crack the exam and those are ones with not just sheer intelligence but also illuminating personality as well.

Amrapali kata is one of the youngest candidates to crack UPSC in the year 2010.

She is famously known for her passion and maturity to handle any kind of tough situation at such a young age.

She was born and brought up in the city of Visakhapatnam, Andhra Pradesh.

Amrapali is the daughter of Venkat Reddy kata who used to serve as a professor at Andhra University.

Her mother is Padmavathi and she is a homemaker.

Amrapali is not the only daughter of her parents she also has a sister who currently serves in the revenue department of Karnataka.

Many of you might not know but Amrapali is a fellow scorpion, and is truly brave and compassionate like a true scorpion as well.

Amrapali completed her schooling at Sai Satya Mandir school which is located in Visakhapatnam itself.

She was always a bright student and never had trouble with her studies.

After completing class 12th, she was able to achieve a seat in one of the prestigious UG colleges that is IIT( Indian Institute of Technology).

She then completed her undergraduate degree with a B. Tech.

Amrapali not only did well in JEE mains exam and secured a seat at IIT, Chennai.

But also after completing her graduation she also sat for CAT which is again one of the toughest exams in India at the PG level there she secured a seat at the top college that is IIM, Bangalore, and completed her MBA from there.

The journey after post-graduation

Amrapali was always determined to achieve something extraordinary and she for a fact loved her country very much as well.

What did she do after completing her MBA?

Amrapali joined a bank named ABN AMRO because she wanted some clarity about whether she wanted to continue in the corporate or not. There she worked as a junior relationship banker and also earned well for herself and her family.

But soon she realized she has other roles to play and started preparing for the UPSC exam without giving it a second thought. Her fondness for civil servants made her choose this role.

Amrapali prepared for the exam with her full heart and was totally determined about what she wanted to do.

This rock-solid determination was one of the biggest reasons behind her wonderful results.

Amrapali was able to secure the 39th rank in the 2010 examination.

This made her one of the youngest students to crack the exam that year.

Not only this but IAS Amrapali’s mark sheet provides true inspiration and motivation for all the aspirants out there.

Where is Amrapali posted now?

“The world is not a easy place for girls and specially in male dominated sectors, we need to prove ourselves everyday that we are not less than anyone.”

As a women IAS officer, IAS Amrapali’s journey has been really inspiring and motivating.

She is also the first woman to be appointed as an IAS officer in the Warangal district.

With her great courage and passion for her work and position, she proved that women should be taken as equal to men.

During her duty, she even suspended some of her subordinates who were corrupted and did not work properly with proper morals and principles after this incident, all of the officers under her were extra cautious and no one dared to break rules or make space for corruption.

Being Daring was one of the greatest qualities of her and also her leadership qualities were praised by many of her colleagues and superiors as well.

IAS Amrapali led her department very well. and none of her juniors or colleagues had any issues or complaints.

She not only did her duty towards the district she was posted in well, but also she never failed to inspire the youth.

She especially shared her experience, the phase of preparation, how she decided that she wanted to become an IAS officer, and also what problems she faced after clearing the exam as well.

Amrapali never failed to spread awareness about gender equality and

she proved in every step of her work that no woman is less than a man and no man is superior to women.

Amrapali was fond of her work and considered Warangal to be her home thus she did a lot of work towards the beautification of the place.

She never took Waranagal as just a place where she was posted but as a home and the people there were like her family as well.

In the beginning, she worked towards the basic problems of the society like sanitation, safe water supply adequate amount of electricity, etc.

After solving these problems she went forward with the beautification of the place.

She added variously illustrious pictures and graphics to the government walls, made sure to plant numerous trees around various places in the district to make it look greener, made the flyovers cleaner, and also repaired the damaged roads as well.

Some unknown Facts about IAS Amrapali

This was IAS Amrapali who is an epitome of a true IAS officer who devoted her whole life to the upliftment of the society and worked with such grace and passion that everyone was fond of her.

From blood donation camps to fixing sanitation she worked for every sector.

She did her MBA in the hope of a job but later she git to know that her destiny was something else and she was made for this job only.

IAS Amrapali is extremely good at what she does and she also loves to work for the people and this is what makes her such an amazing IAS officer.

How to Write Good Essay: Do’s and Don’ts in UPSC...

How to choose an optional subject...