Home » The journey from dentist to IPS Officer, Akun Sabharwal 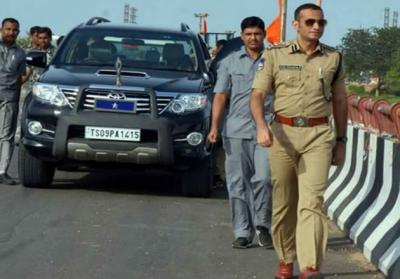 Akun Sabharwal, the courageous IPS Officer was born on 4 December 1976 in Patiyala, Punjab. His father was in Indian Air Force. His father was a big inspiration for him and Akun always looked up to his father and considered him his idol.

He saw his father working for India which he turned into his goal.

Later in 2004, Akun was married to the youngest female IAS Officer Smita. From his childhood only he was a brilliant-minded student. Akun did his schooling from Kendriya Vidyalaya of various states according to his father’s posting.

He attended Kendriya Vidyalaya from cities like Chandigarh, Bangalore, Ooty, Pune, Assam, and Delhi. It gave him an edge of experiencing the cultures of different cities, to explore the tradition and lifestyles of people in various cities.

The IPS Officer was very good in Mathematics since his school days but at that time, he decided to pursue his career in the medical field. He wanted to become a doctor then and serve our nation.

Akun completed his medical degree as a dentist at the Patiyala Dental College.

He was not a bad dentist, he was quite popular as a dentist. Everything was almost fine when he decided to prepare for the UPSC CSE exam. He gave the exam, aced it, and became a brave IPS Officer.

Change of profession can be done at any point in time, this was proved by Akun Sabharwal.

After becoming a dentist, Akun thought of pursuing his career in a different profession. He always thought of making the world a better place.

So Akun gave the UPSC CSE exam where he was ranked 33 in CSE and so is now an excellent IPS Officer.

IPS Akun Sabharwal is a very down-to-earth person but extremely disciplined. Akun is a person of high morals and values. His journey is motivating. Akun showed the path that anything is possible if you desire. He joined the civil services after an existing career that requires a great amount of bravery and determination.

Akun’s life decision is not any gut oriented.

Though he changed his entire profession, it was not for himself, Akun wanted to serve the country, to be a part of our nation’s protector. He did not quit until he got the results in his court. Akun Sabharwal is now IPS Akun Sabharwal is because he is unstoppable.

Akun started his career with the biggest training platform in India,  Lal Bahadur Shastri National Academy of Administration in Missouri. Training days were very much excited for him.

Where was Akun Sabharwal’s first posting?

IPS Akun was selected for IPS when he was just 23 and tied the knot in 2004 to one of his batch mates who is the youngest female IAS officer in India. After his marriage to his wife Smita Sabharwal, an IAS officer, Akun joined the Andhra Pradesh cadre in  2004.

Ankun and his wife Smita are very happy to have two kids whom they named Nanak Sabharwal and Bhuvin Sabharwal. Even though Akun has already taken responsibility, Akun never compromises his presence in serving our country. He never fears anything and is thus always ready for the toughest situations.

IPS Akun Sabharwal also Doctor Akun Sabharwal have followed his passion. Akun set his goal with a strategy to crack it. He saw big dreams and converted them into marvelous reality.

During his preparation for the UPSC CSE exam, he studied thoroughly and smartly so that he can pass the exam. Akun put a lot of effort into making his dream come true. He studied flexible hours while doing internships as a dentist. Managing both is not easy. But as it is known to us that success comes with a price so he had to put a lot of labor as a price for his goal which is fair enough.

What was Akun Sabharwal’s optional subject in UPSC?

IPS Akun’s first posting was in Anantapur in Rayalaseema which is famous for factional feuds. Even a movie named Rakta Charitra was based in this region.

Massive development occurred in Visakhapatnam while Akun was a superintendent there. Related IPS Akun Sabharwal in the year 2007 became the Superintendent of Police. He served there till 2008.

Reign of Akun Sabharwal- The fearless

During Akun’s reign as the superintendent, he made possible many things that were impossible before.

Akun neutralized 36 Maoist cadres and 132 surrendered in 28 fire exchanges. Due to his breathtaking work, Akun was elected as Deputy Commissioner of Police of Hyderabad in 2012.

His amazing performance could not go unnoticed and so Akun got selected as the Deputy Commissioner in Hyderabad.

But a strict curfew was imposed in that area due to communal tensions for nine long months.

There were many urban problems like robberies, and irregular traffic management, which was all solved by Akun Sabharwal.

Akun got trained by respected Mukesh Agarwal in Kamrup, Assam.

Akun worked in the Sadiya and Charaido regions of Assam. These areas were severely tormented by extremists. Akun worked very efficiently and diligently.

When conspiring news about Telengana’s separation was viciously spreading, Akun served there as the DCP.

He managed the situation brilliantly and thus brought peace back to the table.

Smoothness and harmony were restored during that tremendous situation. The extreme drugs problem in Hyderabad too was solved by DCP Akun Sabharwal.

IPS Akun Sabharwal is one of the best in his field. He has been working on various honorable posts over the years and was perfect in each of them.

Not only that, but he also worked as the Joint Director of Anti Corruption Bureau and a Commandant of an Armed Police Battalion for 9 months.

Next, he joined as an Assistant Director of the outdoors in the Sardar Vallabhbhai Patel National Police Academy.

The DCA made several raids on places like corporate hospitals, pharmaceutical companies, medical stores, blood banks, and other medical-related sectors under Akun’s supervision. He also booked several violations throughout the state.

How to work in harsh situations & under immense pressure?

“Hobbies are something a person should never leave behind” –  Akun Sabharwal

Apart from serving, he also does some things which he likes to do in his leisure time. IPS Akun Sabharwal is a great fan of running and cycling.

Akun enthusiastically does running and cycling as he loves them a lot. Akun most favorite activity is the one which he has been doing for quite a long time, which is 42km. Marathon.

Akun loves his motherland India, so to protect our country, he likes to be healthy, physically fit and maintains a good physique which is why his interest grew in this section. To date, Akun has completed 7 marathons which are praiseworthy. The Officer does everything perfectly as if he is the best in every field.

IPS Akun said in an interview that running gives him the time to introspect and talk to himself. Akun has done cycling for 1475 km in 2015 from New Delhi to Mumbai in only 6 days.

As we all can see Akun is the best in every prospect, his job, his developmental skills, and also is a person of calm nature who leads a disciplined life.

Akun is the true inspiration for every person who wants to fulfill their dream and be the best at it.

IPS Akun Sabharwal never stopped. He did not stop after becoming a dentist, instead, he cleared India’s one of the toughest exams UPSC CSE, and became an accomplished IPS Officer.

Akun did not rest after becoming IPS, he worked harder than ever. His love for his country made him carry out various successful operations and got elected as the Superintendent of Police.

Then with his range, he carried out some extremely tough operations and handled many difficult matters which were solved before. Thereafter, he became the DCP.

He still puts his best foot forward every day like before. There was a problem with providing medicines without inspecting the prescription. To prevent this problem, Akun started an awareness program called “No bill, no pill” which proved to be very helpful and was much needed.

As Akun is a health-conscious person, he helped many people who were having problems related to health. For his good work again he was elected to the Civil Supplies Department in Telangana in April 2018.

Akun Sabharwal is an ordinary human being just like us. But he saw dreams as a child and fulfilled them as an adult. Akun’s passion and desire made him an extraordinary person. Many students want to clear the UPSC exam, many do, and also many do not. The difference between these categories is the patience and determination of the students. Students who want to excel must read IPS Akun’s biography to get inspired

As preparation time is a very crucial time, there are a lot of students who tend to give up but they should stay motivated all the time.

Akun’s excellence in every field, his brave nature, his knowledge, skills, determination, and consistency are very much inspiring. Students must learn from this great personality to enhance theirs.

Akun is a human being who has crossed hurdles every day to reach a milestone. He faced failures, but never gave up. He never let himself break into that situation, instead he handled it calmly and got up well and even brighter. Each failure gives you a lesson, it is your choice to give up or rise again more fiercely like IPS Akun Sabharwal.

IPS officer Akun Sabharwal was from which school?

What is Akun Sabharwal’s current age?

How to Keep Yourself Motivated and...