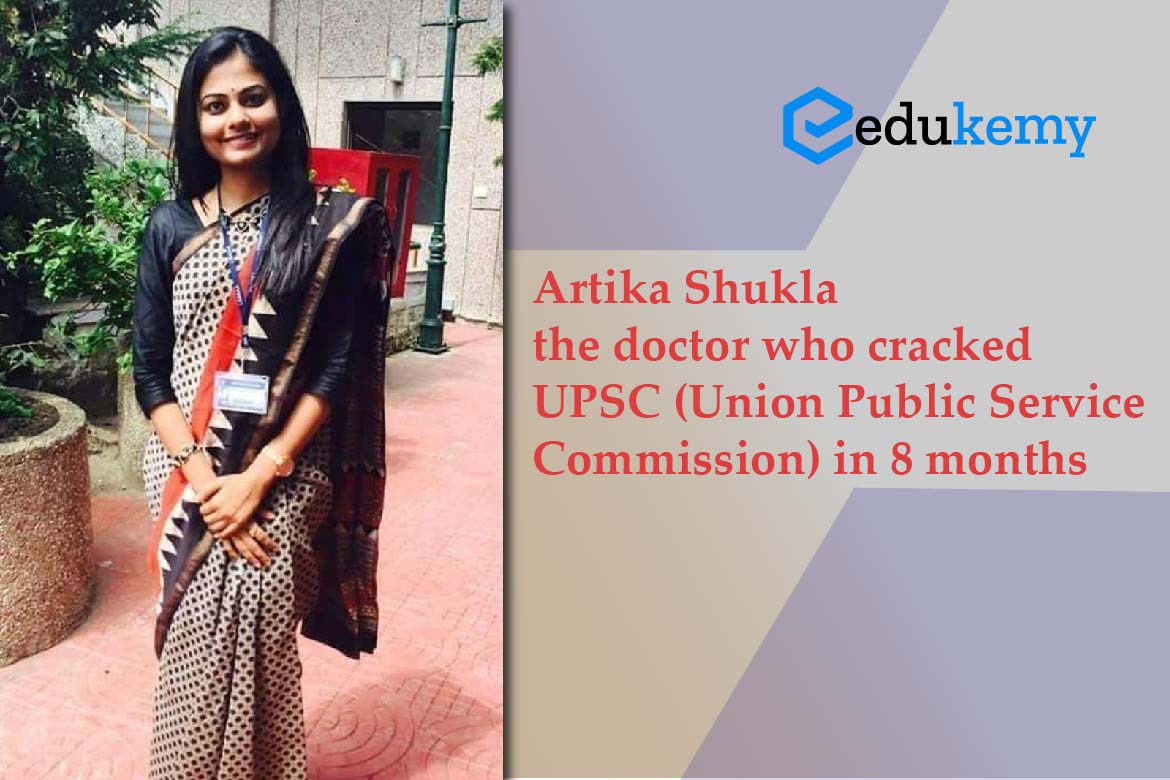 “Maybe it was never about the happy ending, maybe it was about the story.” written in Dr. IAS  Artika Shukla’s biography on social media.

Artika herself says that the journey, the path you traced out matters more than the destination. Her life’s journey till now has been incredible. Artika is one of those UPSC candidates who has aced the UPSC exam on the first attempt. Also, she was studying medicine at that time so she prepared for the UPSC exam in just 8 months without any coaching classes. How mind blowing is that! Keep reading to know her rank, her biography, how she managed to study both simultaneously, and some preparation tips from her which will help you to crack the UPSC exam.

gained AIR 4 in the UPSC exam

What was Artika Shukla’s optional subject?.

She chose Medical Science as her optional subject before the UPSC exam.

She completed her MBBS degree and was doing MD.

What was the rank achieved by Dr.Artika Shukla in the UPSC exam?

Getting AIR 4 in the UPSC exam, on the first attempt, is not everyone’s cup of tea. but Artika Shukla made it possible with only 8 months of preparation.

Two siblings are IAS Officers, one sibling IRTS Officer and all three of them are UPSC qualifiers that portray the discipline and valuable teachings of their parents who raised them to serve our Nation.

Dr. Artika Shukla did put up a lot of dedication and challenging work to clear the exam in her first attempt. She worked toilsomely and smartly to achieve this. Her preparation tips are worth knowing for all the candidates so keep scrolling to know her suggestions.

It is not that IAS and doctors do not have a love life!

Artika met the love of her life while she was training to be an IAS officer. She encountered Jasmeet Singh, who is an IAS officer. He also qualified for the UPSC exam in 2015 which is in Artika’s batch and got AIR 3.

Dr. IAS Artika Shukla and IAS Jasmeet Singh tied knots to each other in 2017 and are a happily married couple now.

A remarkably interesting fact is that Tina Dabi and Athar Aamir Khan, the first and second rank holders of the 2015 UPSC exam also got married to each other. So it can be officially said that 2015 was an IAS match-making year.

Dr. IAS Artika Shukla is a very down-to-earth person. She loves spending time with family and friends. She enjoys her time the most when she is with her close ones.

Artika loves to travel with her family and friends whenever she gets time. In her Instagram account pictures, she posts many pictures of her traveling and spending time with her favorites.

Marksheet of IAS Artika Shukla- Inspiration for all the aspirants

Let us take a glance at the mark sheet of Artika Shukla, the 4th ranker in the 2015 UPSC exam.

Dr. IAS Artika Shukla after qualifying for the UPSC exam and completing her training got her first posting in 2016 in the AGMUT (Arunachal Pradesh Goa  Mizoram Union Territory) cadre.

After IAS Artika’s marriage to IAS Jasmeet in 2017, she was transferred to the Rajasthan cadre. Currently, IAS Artika Shukla is posted at Ajmer as the Sub Divisional Magistrate.

For the preparation for the UPSC exam, you need to be extremely specific about the books and notes you follow. Here are the books which are suggested by Dr.IAS Artika Shukla, AIR 4 in the 2015 UPSC exam. She read those books and sources and without taking any coaching classes, she cracked the exam. So these books and sources have proved to be absolute gems. The books are as follows:-

Essay in Mains – Current Affairs, quotations by great personalities. Other than that, you can practice writing essays to improve your writing.

Artika Shukla suggested not buying more than two books per subject. The forementioned books and sources are more than enough to qualify for the UPSC exam.

Top strategies to crack UPSC in less amount of time

A girl born and grew up in Varanasi is now called a Doctor and an IAS Officer. The IAS Officer who cracked the UPSC exam on her first attempt preparing all by herself in 8 months with AIR 4 is not an easy task. Dr. IAS Artika Shukla has raised the bar of outstanding. But she was just an aspirant once who was determined to fulfill her dreams. Anyone who is reading this article right now can be like her and serve their own country. Artika Shukla is a true inspiration for all the students who are determined to make their dream a reality. Artika Shukla’s inspiration was Dr. APJ Kalam. Similarly, you also follow a great personality’s thoughts which will help you to keep motivated when the times you will feel low. These real-life examples are to show that people before you have achieved so many things so, can you? So keep working hard, have patience, and read more stories like these in Edukemy to keep yourself inspired.

Edukemy is a platform that helps UPSC aspirants to achieve their goals and this platform has the top best faculty and just the right guidance an aspirant requires, this makes it the top choice for all the aspirants all over the country

Nitika Khandelwal, IAS who knew how...