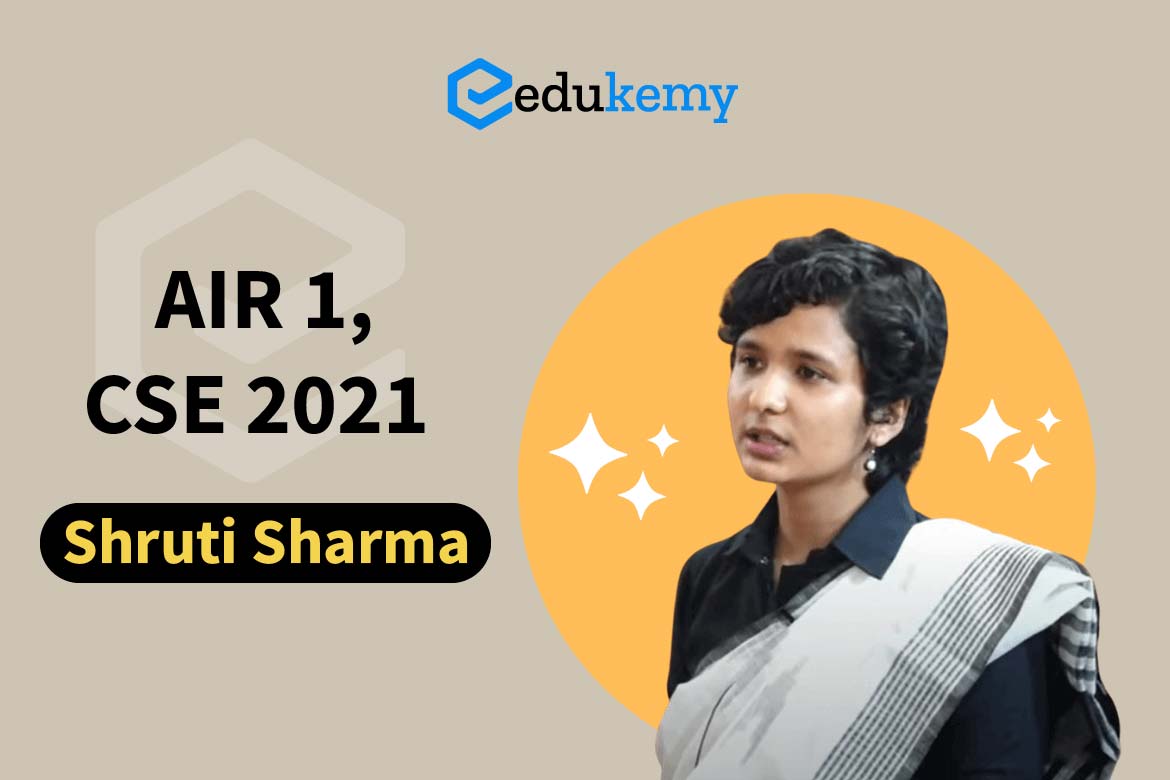 Shruti Sharma is a dedicated student who recently passed the Union Public Service Commission mains exam 2021 and placed first in the CSE exam. Shruti Sharma received the first place in the CSE 2021 examination. As we all know, UPSC is a rigorous exam that is only passed by a select few students. The top 54 candidates were chosen for the topper’s list, with Shruti Sharma’s name at the top. Shruti Sharma is from India’s capital, New Delhi. Her family comes from Basta village in the Bijnor region of Uttar Pradesh’s Chandpur Tehsil.

Shruti Sharma, who came in first place, received 1105 out of a possible 2025 points, or 54.56 percent. The UPSC administers the main exam, which carries a total of 1750 points. The UPSC CSE written exam (main) has nine papers, although only seven of them are used to determine the final merit ranking. Each of the seven papers is worth 250 points. For the remaining two CSAT tests, the candidate must obtain the minimum qualifying marks set by UPSC each year. The UPSC interview round is worth 275 points. Shruti Sharma, the UPSC CSE 2021 topper, received 1105 out of a possible 2025 points, according to the mark sheet. She received 932 points in the UPSC civil services written test and 173 points in the interview.

She received her elementary education at Cambridge Primary School in Delhi, which she attended from kindergarten to fifth grade, before enrolling in Sardar Patel Vidyalaya in Delhi. Sharma, who was a member of the student executive during her school years, was named secretary of cultural affairs, in charge of organising numerous school activities. She graduated from Delhi’s St Stephen’s College with a Bachelor of Arts in History. She spent her undergraduate years debating in a variety of formats, including parliamentary debate, traditional debate, and turn quote debating. She then enrolled at Jawaharlal Nehru University (JNU) for her post-graduate studies, however she soon dropped out. She afterwards went to the Delhi School of Economics in New Delhi to obtain an MA in Sociology. She began preparing for Jamia Millia Islamia Residential Coaching Academy while obtaining her MA (RCA).

Although coming from a family of engineers and doctors, Shruti is the only member of her family who chose the arts and studied history. Dayaswaroop Sharma, her great grandfather, was a doctor from Athai, Chandpur. Devendra Dutt Sharma, her grandfather, was also a well-known doctor. Sunil Dutt Sharma, her father, is an architect who operates a construction consulting firm in Delhi. Sunil eventually became the principal of the Bal Gyan Niketan School in his hometown of Basta. Yagya Dutt, her paternal uncle, and her cousin sister are also doctors. Rachna Sharma, her mother, is a former teacher from Bulandshahr. Shruti’s younger brother is a cricketer who plays for Uttar Pradesh at the U25 level.

She values variety and is ready to learn new things, such as languages and cultures. She enjoys learning about various cultures, reading books, and watching movies, to name a few of her interests.

In her Mock Interview, she expressed her reasons for wanting to work in the Civil Service, saying, “I suppose I come from a wealthy upbringing, so I’ve always wanted to do something that would allow me to contribute back to society in some way.

Second, I feel that the range and extent of these services can be an outlet for great personal growth and a great deal of learning on a personal level.”

– She also mentioned in the interview that she had learned Urdu.

– Sharma was studying her Master’s in Modern History at JNU when her father told her about the Residential Coaching Academy (RCA) at Jamia Millia Islamia. In the year 2019, she took the admission exam.

– She had to take the prelims in Hindi on her first attempt due to a technical glitch. As a result, she only failed the mains by one mark. She recalled the difficulties she had in her first attempt at an interview, saying, “This is the second time I’ve attempted it. I took my mains examination in Hindi due to certain complications with the medium of teaching. I was one mark away from missing my interview call.”

– Shruti Sharma made waves on May 28, 2022, after the UPSC Toppers 2021 list was released. As the top three candidates in the UPSC examination, it was a significant occasion in UPSC history.

– An ardent supporter of foreign cinema, Shruti has seen a wide range of films, including Iranian and Hong Kong productions.

– History was her UPSC optional subject. – Sarveshwar Dayal Saxena and Dushyant Kumar are two of her favourite poets.

– Shruti’s maternal grandmother stated in an interview that she wanted Shruti’s mother, Rachna, to pass the Civil Services Examination. However, Shruti’s maternal family lived in a rural location at the time, and coaching centres were far away, so Rachna was unable to fulfil her mother’s wish.

“This journey forced a lot of hard effort and patience,” Shruti said of her strategy for success. It’s not about the hours you spend studying; it’s about how well you study. While studying is important, calculating hours is not. Strategy is also crucial, therefore while studying, one should keep their sources limited. Aside from the books, my notes, newspapers, and exercise answer writing helped me a lot.”

We can see that girls can work just as hard as boys today. This year, women dominated the exam, with Shruti Sharma securing first place with an All-India Rank 1 finish. Many people have complimented her and sent her their best wishes since then. She has dominated the news and is the talk of the town since the results were published.

How should I start my UPSC preparation?