Home » How To Prepare Polity For UPSC CSE

We have summarised the topic-by-topic Indian Polity syllabus for UPSC in this article to assist you in covering this subject thoroughly. 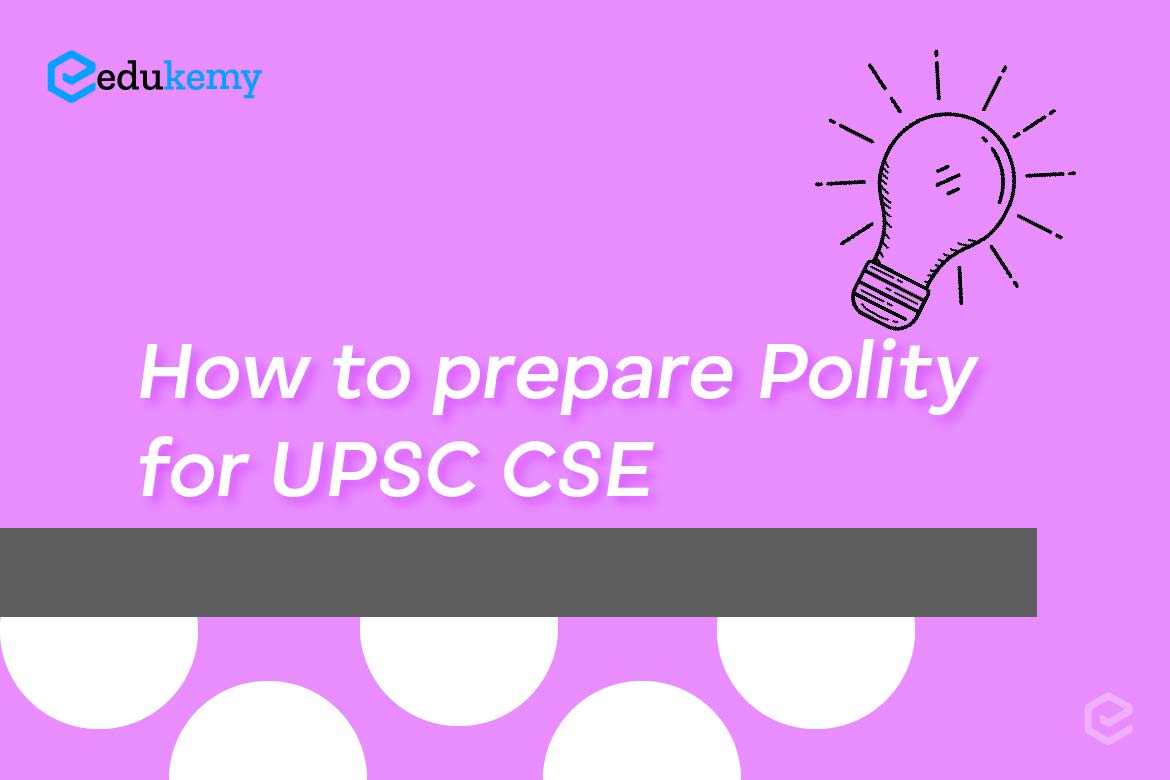 One of the most significant subjects for the UPSC Civil Services Exam is Indian Politics. In all three phases of the Civil Service examination, questions directly relevant to the constitutional framework were posed. We have summarised the topic-by-topic Indian Polity syllabus for UPSC in this article to assist you in covering this subject thoroughly. The term polity refers to the system or pattern of government. Polity is a subject that covers the entire operation of the government in the country. This provides an in-depth grasp of the country’s executive, legislative, and judicial institutions, as well as the numerous constitutional powers. Aside from understanding the Indian Constitution, aspirants aspiring to appear in the civil services test must be well-versed in the fundamentals of our political system. This article will help you to prepare polity for UPSC CSE.

Importance of Polity in UPSC

The Constitution is unquestionably the most important topic in Indian politics, but it also covers themes such as government policies, center-state relations, new bills, laws, governance concerns, social justice, and so on. It is critical for a candidate to keep up with local events because this fosters understanding of one’s rights, duties, and responsibilities and allows one to make an informed decision. If you want to pass the UPSC, you must have a thorough awareness of Indian politics and a methodical approach to it.

Polity is one of the easiest subjects to score because the syllabus is factual and straightforward. Expect a number of uncomplicated questions in the UPSC Prelims Polity section, and if thoroughly prepared, you should be able to get the majority of the answers accurately. Preliminary exam questions on Indian politics may include both static and dynamic aspects of the subject. There will certainly be a lot of questions in this area. Over the years, it has been discovered that the questions are mostly direct, and they range in difficulty from easy to moderate.

Some book Suggestions for Polity

A UPSC Civil Services Exam applicant is fully aware of the relevance of “Indian Polity” in both the Prelims and the Mains GS Paper II. Laxmikant’s “Indian Polity” is considered a bible for preparing the polity part for both examinations. It’s worth noting that the book simplifies the concept of the Constitution and its numerous schedules for aspirants’ ease of comprehension. While the book contains every little and crucial item that must be learned and retained until the exam, the aspirants are frequently overwhelmed by the volume of the book.

Link for resources of Polity:

How to Prepare for UPSC Prelims by Studying Polity

The Indian Constitution, which lays out the complete functioning framework, is the bedrock of Indian polity. As a result, everything from the desire for a constituent assembly to the construction of the constitution must be thoroughly researched. In the UPSC CSE, questions focusing on analytical ability have recently been posed. As a result, you need completely prepare each of the above-mentioned topics in order to answer questions from the UPSC polity curriculum. Here are some UPSC preparation recommendations for Indian politicians:

D.D. Basu’s Introduction to the Constitution of India can be quite valuable for mains, as it provides a thorough examination of the subject. NCERT textbooks are fun to read because of their clarity and simplicity, and they provide a strong foundation for beginners. They don’t take up a lot of a candidate’s time in terms of preparation. To begin, start with Class IX NCERT, Democratic Politics-I, and then move on to Class X NCERT, Democratic Politics-II, where one can gain conceptual clarity regarding politics as well as some concepts necessary to understanding the constitution.

Finally, move on to the Class XI NCERT textbook, Indian Constitution at Work, which is a must-read and serves as a requirement for reading other standard texts. It is suggested that you study the NCERT books attentively and make a habit of underlining essential points as you read them for future reference.

The next natural step in improving one’s preparation is to read M. Laxmikanth’s India Polity, which can help a candidate score higher in this part in the Prelims stage. It is the most complete and resourceful book for preparing for the prelims of Indian Polity. This book will cover almost all of the topics stated in the syllabus. The language employed in the book is clear, and even a novice may understand it.

Candidates do not require to memorise all of the Indian Constitution’s articles. Only a few essential things are required. If someone is familiar with the fundamentals and has revisited the subject a sufficient number of times, the majority of relevant articles will automatically be recorded.

Polity questions in prelims can get complicated as in the first look of it, all options look similar and this may lead to confusion and ambiguity. Regular reviews and MCQ practise might help to reinforce the fundamentals and increase one’s confidence in the subject. Solving previous year’s prelims question papers can help a candidate understand the type of questions that will be asked and prepare accordingly.

It is vital to read a national daily such as The Hindu or The Indian Express, paying special attention to news stories and editorials that are related to the Indian Constitution or the national and international political systems. All new bills, actions, and associated provisions must be kept track of.

In polity, there are a few basic areas where you should concentrate:

NCERTs contain reliable and authentic information. These books explain the subject matter in a simple language. NCERT notes are a must-read because they contain the important gist of facts and concepts in a crisp and point-wise manner. All the 3 rounds of the IAS exam, preliminary, mains, and interview, have focused on Indian politics and constitution. In addition to knowing the Indian Constitution, applicants for the civil services exam should be familiar with the principles of our political system.

What is LBSNAA? Everything you need to know from LBSNAA...

How to finish the UPSC Prelims paper in time?

Secret to Ace CSAT for UPSC...