Home » What is LBSNAA? Everything you need to know from LBSNAA Training to LBSNAA Fees

What is LBSNAA? Everything you need to know from LBSNAA Training to LBSNAA Fees 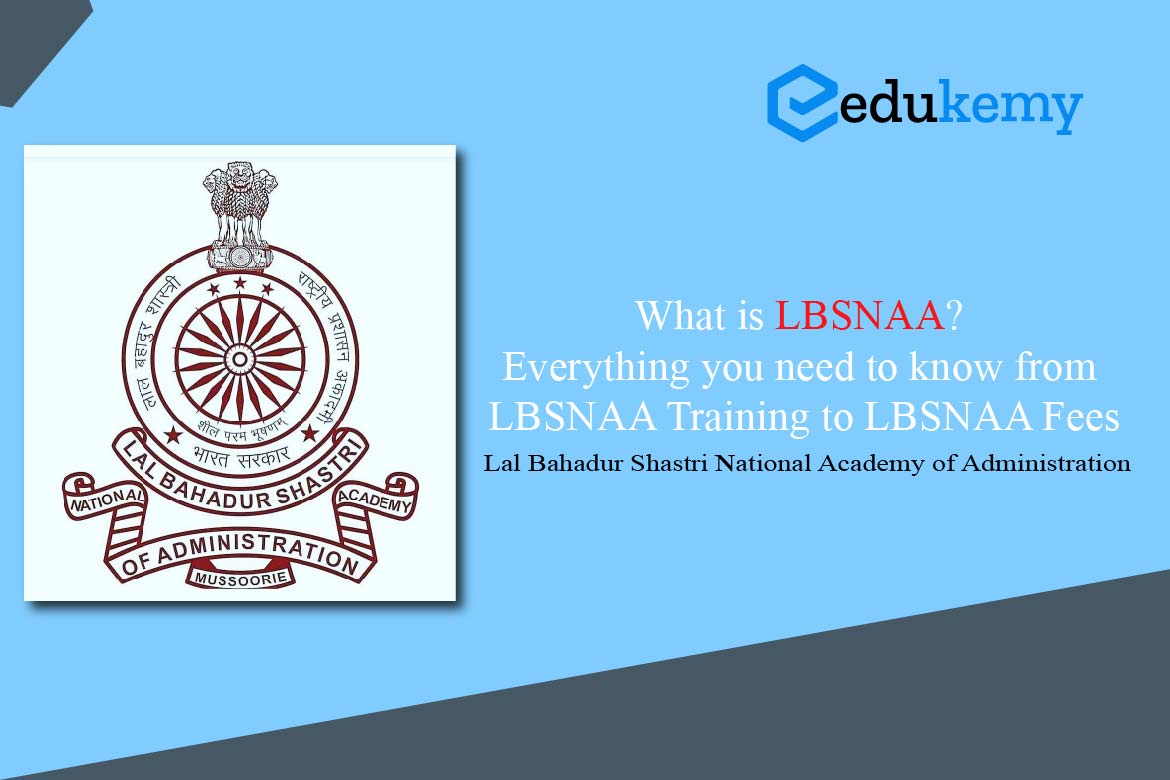 LBSNAA (full form: Lal Bahadur Shastri National Academy of Administration) is an institution based in Mussorie, Uttarakhand which was started in 1958 by the then Union Minister, Pandit Govind Ballabh Pant, to nurture and focus on the all-round development of the upcoming IAS officers. Selected candidates from across the nation come here to become the next officers of India.

LBSNAA, which stands for Lal Bahadur Shastri National Academy of Administration,  is a training institute, situated in Mussorie, Uttarakhand, with the main aim of training civil servants of the IAS cadre. They also conduct Civil Service Foundation Programme.

Formerly known as the National Academy of Administration, on April 15, 1958, the then Union Minister Pandit Govind Ballabh Pant announced that the government would set up an institute to guide and nurture future officers of all civil services. Ministry of Home Affairs decided to combine the IAS Training College in Delhi and the IAS staff college in Shimla resulting in the formation of Lal Bahadur Shastri National Academy of Administration in the Charleville Estate in Mussorie. Since 1985, LBSNAA has been functioning under the control of the Ministry of Personnel, Public Grievances, and Pensions.

Like any other well-established institution, LSBNAA is equipped with facilities for the comfort and development of its residents. Wifi service is provided throughout the whole campus. Computer halls and Lecture halls are also present. Sampoornanand Auditorium is the central largest hall built for all cultural programs and functions. Cycling paths, modern gyms, hockey and football grounds, basketball courts, tennis courts, etc, are also provided for the officers to train and improve their physical fitness. The academy also has a horse-riding infrastructure for which the instructors are brought from the President’s bodyguards. The library called the Gandhi Smriti Library holds over 1.65 lakh books. A full-fledged medical center is also provided for the trainees. Residents are built with telephone, television, and wifi service with up to two-seater accommodation along with central heating. Complete care is taken for the officers to stay comfortable during their time in the academy.

Day in the life of an LBSNAA trainee:

A usual day in LBSNAA begins at 6 in the morning. Trainees either go for an exercise drill for an hour on the Polo Ground or a 9-10 km jog. They can also opt for horse riding as well. After the first hour, trainees are given an hour to get ready for the day and have breakfast.

The classes commence at 9 am and last till 5 pm. Classes are divided into 5-6 sessions each lasting for 55 minutes. Evening hours from 5 pm to 7:30 pm are allotted for extracurricular activities such as community services, trekking, short treks, etc.

Any other cultural activities are completed before 8 pm. Dinner time begins at 8 pm after which trainees are given free time and are allowed to socialize with others or prepare for the next day’s sessions.

On weekends, adventure activities such as river rafting, paragliding, rock climbing, etc are organized. Apart from their academic excellence, the institute highly encourages the physical fitness of its candidates and does its best to provide means for it.

What are the LBSNAA training fees?

There are no particular training fees taken by LBSNAA. Instead, during the training period of two years in LBSNAA, IAS officers are paid a “Special Pay Advance” or monthly “stipend”. The minimum stipend ranges from Rs.35000 to Rs.40000 and the maximum stipend ranges from Rs.42000 to Rs.45000 which includes all the deductions – the mess charges, accommodation, water, electricity, uniform, and a few other charges. The mess charges almost round off to Rs.10000.

Here are the monthly accommodation charges (including water, electricity)

The newly recruited IAS trainees go through a training period of 2 years. Their training program schedule is given below:

During this course, recommended candidates from all Grade A posts like IAS, IPS, IFS, etc, are sent to the 3-month course also known as the Foundation Course from September to December. This course mainly focuses on instilling the feeling of ‘equality’ and oneness and the spirit of cooperation among all candidates. After the completion of this course, all candidates, except IAS candidates, are sent to different institutes where they continue their respective training. IAS candidates stay behind where they continue their course in LBSNAA itself.

IAS trainees eagerly look forward to the pan-India study tour called the Bharat Darshan. During this eight-week tour, apart from visiting different places in India and exploring the culture and heritage of India, they also get to visit NGOs, and Army camps, and see and experience the issues and difficulties faced by people. They also get to meet the Hon’ble President of India. This tour is similar to the field trips in school where the whole group was divided into smaller groups and each group had a group leader. This life-changing journey acts as a turning point for most IAS trainees. This learning period begins in February and lasts till May.

The usual day of an OT (Officer Trainee) starts at 6 am with drills and exercises and proceeds to lectures and ends with outdoor events like trekking, horse riding, etc.

In the district training phase, OTs are sent on an 11-month training session where they work as Assistant Collectors in various districts studying the administrative setup and working. Officers get a first-hand understanding of the problems and development issues and learn how to solve their way through.

After coming back from their offsite training, OTs gather back in Mussorie and interact with their colleagues and discuss their experiences about their journey from Phase I to District Training and the problems they saw that people were facing. They discuss and present their ways to work out problems for the welfare and convenience of people. Special sessions are held with experts on distinguished subject matters to discuss different important topics that must be handled professionally.

After a high-level committee suggested that all IAS officers should experience the working of the central secretariat, they are sent to different locations in New Delhi under different ministries where they get a live experience of the working of central government and the center-state coordination. They work as assistant secretaries under their respective joint secretaries on a central delegation for a period of a few months.

After graduating from the academy, officers are then confirmed by the Hon’ble President of India and assigned as the new officers of India. Trainees are awarded an MA(Public Administration) from Jawaharlal Nehru University, Delhi.

Do you get paid in LBSNAA training?

Yes, you get monthly fees or a stipend of Rs.45000. It is also called the “Special Pay Advance”. This stipend is after miscellaneous deductions are made.

How much time do IAS officers spend in LBSNAA?

Do IAS officers get paid during training?

Yes, IAS officers get paid a stipend called the “Special Pay Advance” of Rs.45000 per month (without any deductions). After deductions such as accommodation, mess charges, etc, the stipend gets reduced to Rs.35000 to Rs. 40000.

What is the full form of LBSNAA?

What are the facilities at LBSNAA?

LBSNAA is well equipped with sports complexes along with football and hockey grounds, tennis and basketball courts, and much more. The whole campus is equipped with wifi service as well. Lecture halls and computer labs are provided as well.

Where is LBSNAA situated?

LBSNAA is established in the Charlesville estate in Mussorie, Uttarakhand.

10 steps to make Quasi-Judicial courts work for the people:...

Is it helpful to solve the previous year’s question paper...

How to prepare current affairs notes for UPSC preparation?

Common Mistakes made by working Professional...

How to prepare notes for UPSC...