Home » Electoral bonds, why is it an important aspect of the IAS exam?

Electoral bonds, why is it an important aspect of the IAS exam? 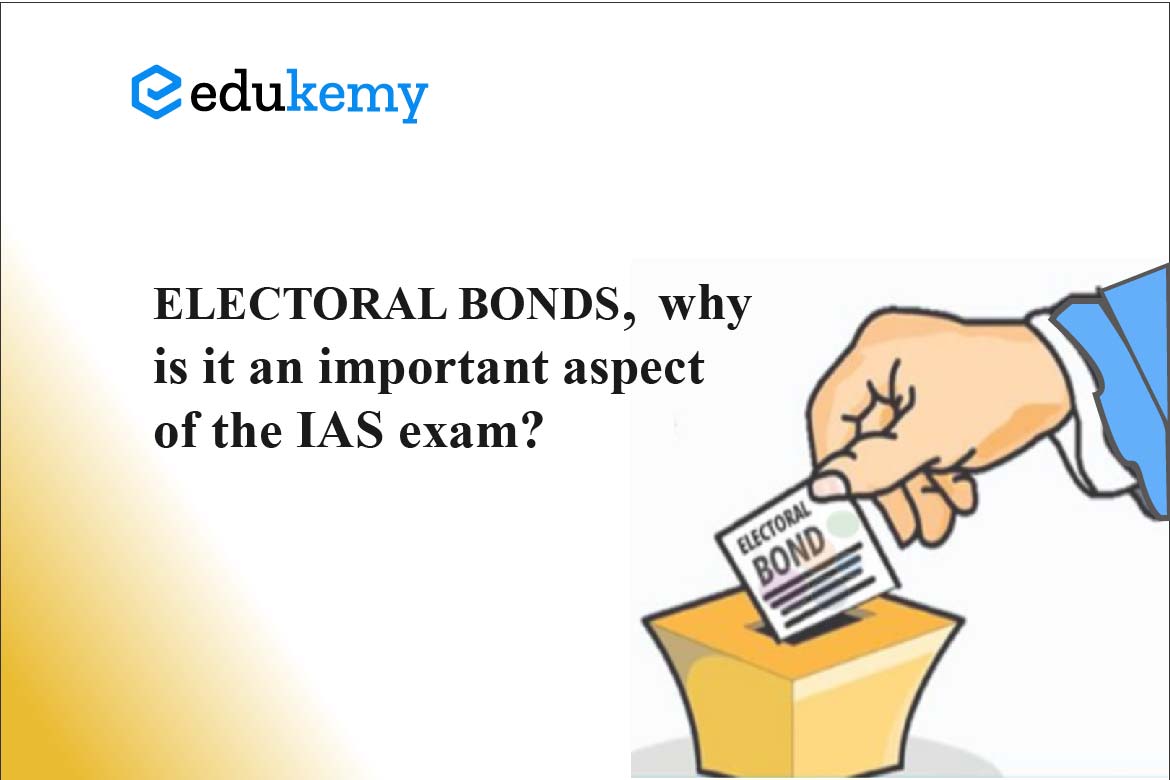 Electoral Bond is basically an important topic for the IAS exam.

UPSC aspirants must be well prepared for this topic which comes in the General Studies Paper-II.

To avoid the problems of black money and corruption, the proposition of political funding through electoral bonds has been introduced. Electoral bonds are instruments that are used to donate funds to political parties.

This was introduced in 2017 along with the Finance Bill.

Why electoral bonds have been introduced?

Our Government has been facing two very serious issues for quite a long time now.

To eradicate these problems, many propositions have been made.

Who can issue Electoral bonds and funds in India?

These bonds are issued only by the State Bank of India.

The authorized branches of the SBI bank can issue and encase these bonds, which are valid for fifteen days from the date of issuance.

The donor is allowed to pay the required amount of donation (in the multiples of 1000) through check or digital mechanisms to an authorized SBI branch and then the donor can give the bonds to a political party or parties of their choice.

The political parties can encase the bonds within fifteen days of receiving the bonds.

In that process, the name of the donor is kept anonymous. The electoral bonds can be bought only during a specific window of time. These bonds can be redeemed from the designated account of a registered political party.

How many have been sold?

Why are ELECTORAL BONDs important?

Firstly, the assurance of clean money is given by the electoral bonds, that the funds raised by the political parties can be counted in for clean money.

Secondly, the name of the donor is not obligated to be revealed in the system.

Thirdly, it brings out transparency in the funding procedures.

SOME POINTS ARE POINTED OUT IN THE FAVOUR OF CRITICISM OF ELECTORAL BONDS.

Though there are methods in which funding can be channeled for black money through electoral bonds. For example, the companies donating funds do not reveal their profit and loss statements.

As the bonds are bought through the State Bank of India (SBI), the government is always in a position to know who the donor is and there is a chance of the ruling party stealing the bonds since it is not obliged to reveal the donor.

But on the good side, there is an eligibility criterion that the companies have to meet before donating to the political parties, that is, the company donating funds has to exist for at least three years from the year of donation which makes it very effective method.

Also, the cash amount has been reduced from rs20000 to rs2000 to bring out more transparency.

What are the drawbacks of electoral bonds?

Representation of People Act of 1951  makes it mandatory for the political parties to reveal the name of donors over Rs 20000 but there are no law donations below Rs 20000 need revelation.

There has been a noticeable delay in the submission of audited reports to the ECI by the political parties.

As per T S Krishnamurthy (Former CEC), it is not known how many times the bonds has been sold before being uncashed by political parties. So a suggestion has been made by Indrajit Gupta that donations be collected with compulsory PAN numbers by ECI.

What is ELECTORAL TRUST?

The operational guidelines issued by the CSBT for the Electoral Trust in 2013 will not only bring transparency from the donor side but will also from the receiver’s side that is the political parties.

Why are electoral bonds in the headlines?

As per Drishti IAS, the Supreme Court flagged the possibility of misuse of money received by political parties through electoral bonds for ulterior objects like funding terror or violent protests.

UPSC GS-II 2017
To enhance the quality of democracy in India, the Election Commission of India proposed electoral reforms in 2016. What are the suggested reforms and how far are they significant to make democracy successful?

These were some of the reasons and questions raised due to which electoral bonds were in the headlines.

Difference between IAS & IFS WHICH ONE TO CHOOSE?

Your success in UPSC Prelims 2023 would depend on what...

How to Prepare Polity for UPSC CSE Prelims 2023?

History as an Optional Subject for...