Home » The Pala period is the most significant phase in the history of Buddhism in India. Enumerate. (150 words, 10 marks)

The Pala period is the most significant phase in the history of Buddhism in India. Enumerate. (150 words, 10 marks) 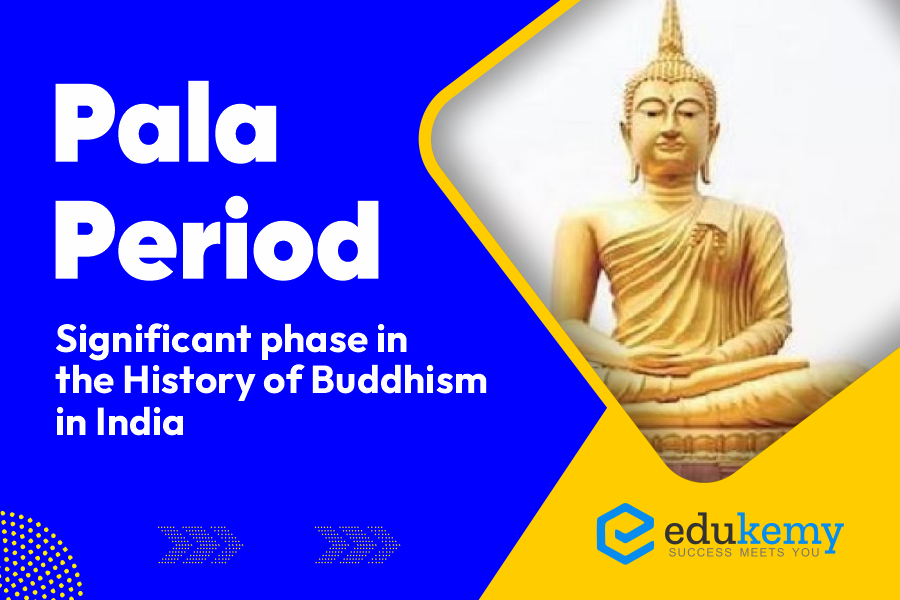 The Pala dynasty, founded by Gopala, ruled the regions of Bengal and Bihar from the 8th century until the end of the 11th century. Their territory consisted of Bengal and most parts of Bihar. A few of the major cities in the territory are Pataliputra, Gauda, Somapura, Monghyr, Ramvati, Vikramapur, and Jaggadala. . The Pala kings were Buddhists and adopted initiative and policies which helped in the enrichment of Buddhism.

Contribution of the Pala rulers in promoting Buddhism

Various mahaviharas, Stupas, chaityas, temples and forts were constructed. Among the various mahaviharas, Nalanda, Vikramashila, Somapura, Traikutaka, Devikota, Pandita, Jagaddala vihara are notable. Somapura mahavihara at Paharpur ,a creation of Dharmapala is one of the largest Buddhist vihara in Indian subcontinent .

Pala painting is characterized by sinuous line, delicate and nervous lines ,sensuous elegance, linear and decorative accent and subdued tones of color. Manuscripts were written on palm leaves. In these paintings scenes of life of Buddha and several gods and goddesses of Mahayana sects are depicted. The impact of tantrism on these paintings are easily visible. Wall paintings have been found in Saradh and Sarai sthal in Nalanda district.

During the Pala period, universities became the center of Buddhist studies. The Palas founded and funded universities like Vikramshila and Odantipur to promote Buddhism, in and outside India. Scholars from all over the world came to these universities to learn the tenets of Buddhism. Many Buddhist teachers from the Pala kingdom traveled to Southeast Asia to spread the faith. For example, Atisha preached in Sumatra.

The Palas forged relationships with different cultures to promote new trade routes. The empire enjoyed good connections with Southeast Asia and the Middle East. Devapala even granted five villages at the request of the Shailendra king of Java for the upkeep of the matha established at Nalanda for the scholars of that country.

Buddhist text of ‘Charyapada’ was compiled in Bangla language during the Pala rule. The Buddhist poet Vajradatta who wrote the famous text of Lokesvarashataka prospered under King Devapala.

The Pala dynasty created the environment to thrive and discuss Buddhist philosophies without prejudice. But, importantly, it also facilitated the spread of these ideas around the world, leaving a legacy that is still visible today.

How will the melting of Himalayan glaciers have a far-...

India has immense potential for solar...