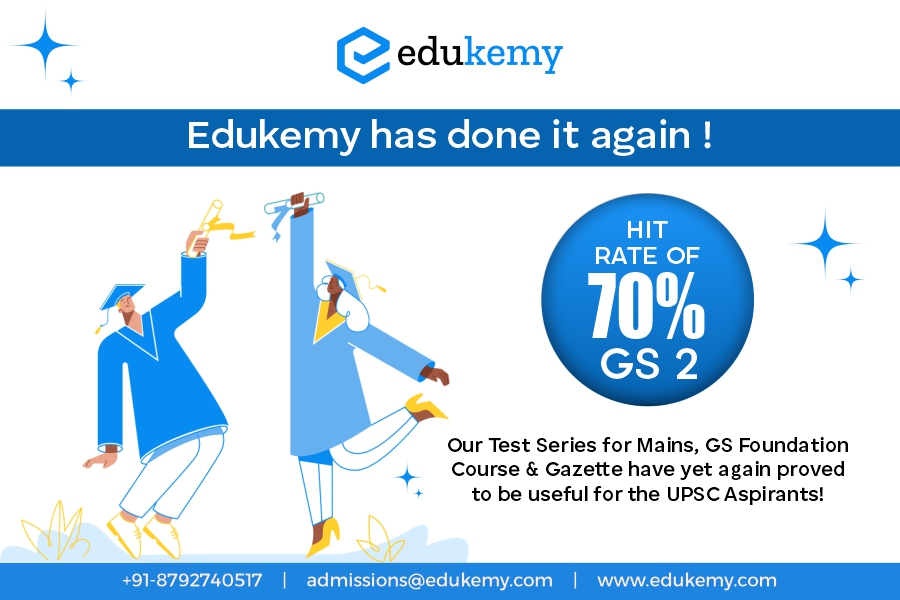 The Civil Services Examination (CSE) 2022 Mains exam conducted by Union Public Service Commission (UPSC) recently concluded. The exam was much like the previous year and the questions were of mixed difficulty levels.

We at Edukemy analyzed the complete paper and mapped it to our various courses, tests, and study materials – including our UPSC Current Affairs Magazines – Daily Gazette, and Weekly Kosmos. And, while we are not boasting, we observed as much as 70% of the questions asked in the UPSC CSE Mains 2022 were covered in our classroom programs and study materials.

We take this observation as the validation of our teaching methodology and pedagogy. This also establishes the fact (along with figures) that our faculty, teachers, and the content team has a deep understanding of the exam pattern and are willing to go an extra mile to provide students with the relevant, important, well-researched, and necessary content so that they can focus on their part of the preparation – understanding the concepts and interlinking the topics.

Below is the GS Question Paper of General Studies (GS) Paper 2 of UPSC CSE Mains 2022, along with the source where it was covered by us.

Question 1: “The most significant achievement of modern law in India is the constitutionalization of environmental problems by the Supreme Court.” Discuss this statement with the help of relevant case laws.

Question 2: “Right of movement and residence throughout the territory of India are freely available to the Indian citizens, but these rights are not absolute.” Comment.

Question 3: To what extent, in your opinion, has the decentralisation of power in India changed the governance landscape at the grassroots?

Source: A Similar question was asked in our test-series:

30 years have passed since the passage of the 74th Amendment Act, however, the ease of living in our cities is not among the best in the world. In this context, critically appraise the performance of the Urban Local Bodies and suggest reforms to further strengthen them.

Question 4: Discuss the role of the Vice –Presidents of India as the chairman of the Rajyasabha

Source: The answer to this question was discussed as part of our mains test series:

Compare and contrast the powers and functions of the Indian Rajya Sabha with the American Senate Highlighting the role played by the Deputy Speaker of Lok Sabha. Mention the process of election to the office of Deputy Speaker.

Question 5: Discuss the role of the National Commission for Backward Classes in the wake of its transformation from a statutory body to a constitutional body.

Question 6: The Gati-Shakti Yojana needs meticulous coordination between the government and the private sector to achieve the goal of connectivity. Discuss.

Source: The topic was discussed in our magazine – Gazette: https://edukemy.com/current-affairs/gazette/2021-10-14/gati-shakti-national-master-plan

Question 7: The Rights of Persons with Disabilities Act, 2016 remains only a legal document without intense sensitisation of government functionaries and citizens regarding disability. Comment.

Source: The topic was discussed in our Gazette: https://edukemy.com/current-affairs/gazette/2021-12-20/mental-disability-in-india

Question 8: Reforming the government delivery system through the Direct Benefit Transfer Scheme is a progressive step, but it has its limitations too. Comment.

Question 9: India is an age-old friend of Sri Lanka.’ Discuss India’s role in the recent crisis in Sri Lanka in the light of the preceding statement.

Source: The answer to this question was discussed in our Test-series:

Despite experiencing many ups and downs over the last decade, the India-Sri Lanka bilateral relationship has seen increased engagement and cooperation. Critically evaluate the statement.

It was also discussed in our Daily Gazette Magazine: https://edukemy.com/current-affairs/gazette/2022-03-30/india-sri-lanka-relations

Question 10: Do you think that BIMSTEC is a parallel organisation like the SAARC ? What are the similarities and dissimilarities between the two ? How are Indian foreign policy objectives realized by forming this new organisation ?

Source: This question was also discussed in our mains test series and Gazette.

The paradoxical co-existence of hunger and malnutrition amidst economic prosperity in South Asian region, reinstates the need for strengthening regional organizations in the region. Comment on the above statement with respect to reviving SAARC.

Question 11: Discuss the procedures to decide the disputes arising out of the election of a Member of the Parliament or State Legislature under The Representation of the People Act, 1951. What are the grounds on which the election of any returned candidate may be declared void? What remedy is available to the aggrieved party against the decision? Refer to the case laws.

Source: The question was discussed in our mains test-series:

Discuss the amendments required in the Representation of Peoples Act, 1951 to strengthen the electoral process in India.

Section 33(7) of The Representation of People Act (RPA), 1951 should be amended to restrict contestation on only one seat for every candidate. Discuss.

Question 12: Discuss the essential conditions for exercise of the legislative powers by ne Governor. Discuss the legality of re-promulgation of ordinances by the Governor without placing them before the Legislature.

Source: A similar question was asked as part of our test series:

‘The Powers of the Governor regarding legislative procedure as envisaged in the Indian Constitution provide the option of withholding assent to the bill but it is alleged that these provisions have been misused’. Comment.

Question 13: While the national political parties in India favour centralisation, the regional parties are in favour of State autonomy.” Comment.

Question 14: Critically examine the procedures through which the Presidents of India and France are elected of

Question 15: Discuss the role of the Election Commission of India in the light of the evolution of the Model Code of Conduct.

Source: The topic was discussed in our Gazette: https://edukemy.com/current-affairs/gazette/2021-04-19/the-election-commissionof-india-cannot-be-a-super-government-the-hindu

Question 16: Besides the welfare schemes, India needs deft management of inflation and unemployment to serve the poor and the underprivileged sections of the society. Discuss.

Source: The answer to this question was discussed in our Mains Test Series.

Performance of welfare schemes that are implemented for vulnerable sections is not so effective due to deficiencies in monitoring and evaluation for policy and budget planning. Discuss

For developmental outcomes, the focus of policymaking should be more on ‘capacity building’ than ‘safety netting’. Discuss.

Question 17: Do you agree with the view that increasing dependence on donor agencies for development reduces the importance of community participation in the development process? Justify your answer.

Question 18: The Right of Children to Free and Compulsory Education Act, 2009 remains inadequate in promoting incentive-based system for children’s education without generating awareness about the importance of schooling. Analyse

Source: The topic was discussed in our Gazette in detail: https://edukemy.com/current-affairs/gazette/2022-06-20/i2u2-initiative

Question 20: Clean energy is the order of the day.’ Describe briefly India’s changing policy towards climate change in various international fora in the context of geopolitics.

Source: The topic was discussed in our Gazette in detail: https://edukemy.com/current-affairs/gazette/2021-07-01/private-sector-in-clean-energy

How many Optional Subjects are there in IAS Exam?

Which is the best newspaper for...

How to prepare notes for UPSC...