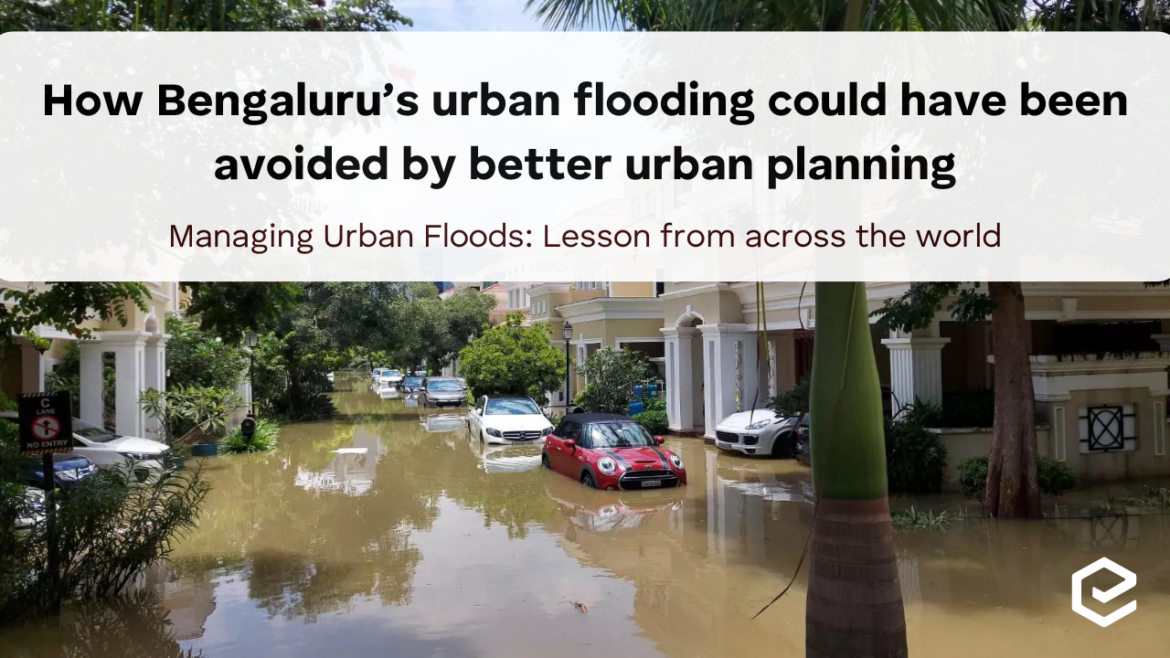 Managing Urban Floods: Lessons from across the world

In September 2019, when a flood wreaked havoc in Hyderabad city, there were talks of urban planning and improving drainage and infrastructure. Nevertheless, the situation repeated itself in October 2020. Since then, we have seen numerous flood-like situations in urban areas including metro cities.

The recent Bangalore floods lead to a halt in the city traffic and IT companies reported losses to the tune of 100s of crores in a single day. Bengaluru city has been grappling with floods since 30th August and the situation is growing worse. And yet the approach taken by the government and the city administration has been that of passing the blame.

It is important to underline that the recent flood-like situation is not a making of a single day or year, nor can it only be attributed to a single person or section of society. It is also worth noting that a solution to this cannot be reached unless the right causes are identified and acknowledged.

The ongoing flood situation has been caused mainly due to the destruction of the natural ecological water system in the city. The natural flow of the water in the city has been towards large and small reservoirs and these reservoirs are now overflowing. The situation is complicated as one can argue that the reservoirs are overflowing due to heavy rainfall in a short period of time. This argument would not hold true as a similar case would have arisen if the average rainfall would have occurred over a span of a few days.

The natural water ecological system consists of water retention at the sink, its runway, and penetration into the soil and crust over time. The city grew almost four times in the last decade and a half. In the race to being the Silicon Valley of India, more and more buildings cropped up, and most of them were not within the comprehensive plan of the city.

The areas around natural lakes, green areas, and parks were encroached upon and converted into cemented buildings and roads. The building construction leads to the excessive hardening of the lower pad of the crust. This changes the natural foundation and hydrological characteristics of the crust below them. Buildings constructed near such lakes offering lakeside views contribute to changed hydrological nature and contribute to low groundwater levels.

The excessive concretization of the area, road building, and infrastructure creation in the parks, all add to this problem. It is well-known fact that the phenomenon of concretization can increase the surface flow of rainwater from 10% to 60%, and in some cases even to 100%. This means that all the water received from the rainfall now needs to be collected via drains and pipes and channelized to large reservoirs. This is the general urban gray planning that is followed in most cities and is the real culprit behind the increased instances of urban flooding across cities.

Following the Beijing flood on July 21, 2012, China undertook the task of controlling instances of urban floods across all cities in the nation. It aims for its 80% of cities to harvest and reuse 70% of rainwater.

China resorted to the concept of Sponge City technology and has been successful in controlling urban floods. The concept draws inspiration from age-old traditional knowledge of its civilization and aims at working with water rather than fighting with it. It thus addresses the issue at the initial sink level.

The sponge city concept is the natural way to manage running water. It calls for preserving and creating natural green spaces in the city landscapes that can naturally collect water and let it seep into the ground and including water harvesting facilities with the aim of reusing the rainwater for household and industrial purposes.

In the decentralized approach, the one followed in the sponge city technology, the water is allowed to run through green patches such as gardens, community spaces, and drains that allow the water to be absorbed and purified in its course.

The net runaway water is thus greatly reduced which can be stored in reservoirs such as lakes and treatment plants where it can be managed easily. The central idea is to minimize the water that gets to the reservoirs and storage tanks.

Thus, the starting point in sponge city planning is to avoid unnecessary concretization and preserve and create natural landscapes and ecological systems. The approach calls for the creation of more green spaces in the cities and has a positive impact on all aspects of the environment. It thus calls for eco-sensitive planning.

How Bengaluru can move towards eco-sensitive planning?

A look at places impacted by the floods in the city highlights that most of these were near places that have very high population density and have encroached on lakes and natural water bodies. Soon after the flooding, the municipal corporation started cleaning lakes and drains that were covered by plant growths and waste materials. This clearly highlights the neglect of water bodies in the city.

Bengaluru city needs to rethink its planning and rules must be laid after a detailed study of the eco-sensitive zones to prohibit construction in and around such areas. As the city expands further, the planning needs to pay attention to less collection of water by man-made drains and more emphasis on creating green spaces at intervals that can act as water sponges.

A continuous and persistent effort is needed to ensure that buildings have water-harvesting technology and green spaces around them. The runway water from roads and streets needs to be collected and harvested in a decentralized manner. This will need the creation of ponds and lakes at regular intervals on the sides of major roads and streets. These sites will also act as green spaces and patches and will add to creating and maintaining a better environment in the city.

Mega-building projects and housing societies should be asked to create green spaces with a water body in an area 1/3rd of the total space. These will help in creating eco-friendly offices and homes.

The city needs to reclaim its status of being a green city and the city of lakes, by maintaining and cleaning its lakes, public parks, and green patches. This can only be ensured if citizens and government come together and work for the common goal. It is the role and duty of citizens as well to protect their environment and the spaces around them.

The present calamity can be converted into an opportunity if citizens and the city administration realize the shortcomings in the city planning and aim to conserve, protect, and build green spaces and resilient ecological systems.