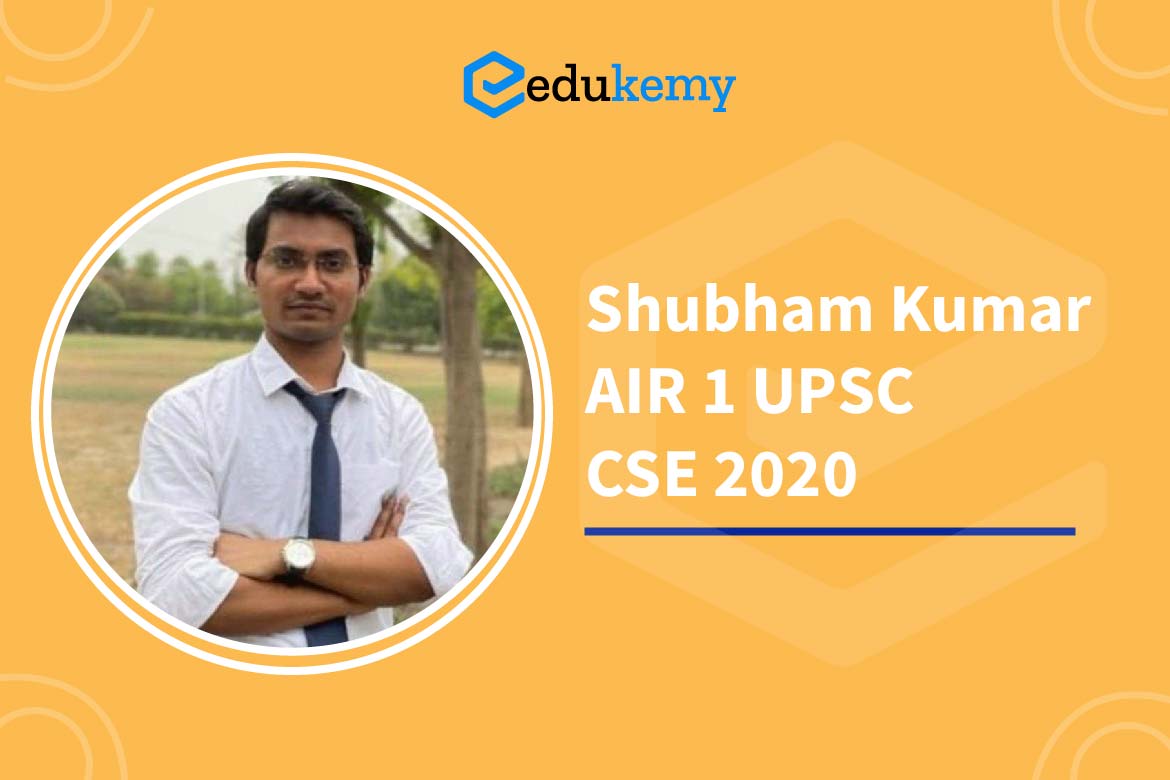 Shubham Kumar, a local boy from Kumhari hamlet village in Katihar district, Bihar, became popular overnight after winning the most coveted UPSC examination, 2020. Shubham Kumar works as an administrative officer in India. In the year 2020, he aced the Union Public Service Commission examination and received an AIR 1. IAS Shubham Kumar has been a source of inspiration for India’s youth. He has made it his mission to address all concerns concerning people. He believes that every public worker should be a “people connect” since he or she is required to serve the people at the grassroots level.

Shubham made several changes to his preparation method after failing to pass the UPSC CSE prelims in his first attempt in 2018, which improved things for him in his next two attempts in 2019 and 2020.

He graduated from IIT Bombay with an engineering degree after growing up in Katihar, Bihar. Shubham claims that after a business internship at IIT, he was clear that he did not want to work in the corporate sector.

Shubham Kumar IAS grew up in the small Bihar village of Kumhari Kadwa, in the district of Katihar. Bihar was his home during his youth and adolescence. He received his primary education at a regional school in his area and completed his secondary education at Vidya Vihar Residential School in Parora, Purnia. He finished his senior secondary education at Chinmaya Vidyalaya Bokaro in Jharkhand. After completing his high school education, Kumar began studying for the engineering entrance exam, where he placed 219th and was immediately accepted into India’s top institution, IIT Bombay. Shubham graduated from IIT Bombay with a B.Tech in civil engineering in 2014. He was a really active student at IIT Bombay, participating in a variety of sports. He was also his hostel’s cultural secretary. He ultimately, objectively chose to enter the Civil Services at the same institute. Shubham Kumar has previously worked as a researcher in the United States. He realised there were many holes in India during his time as a researcher in the United States, and he decided he wanted to work for the country’s growth.

Shubham Kumar is from Bihar, as is his family. Devanad Singh, his father, is a Branch Manager at the Uttar Bihar Gramin Bank in Bihar. Punam Devi is his mother’s name. Kumar is the youngest of two brothers and sisters. Ankita is his older sister, and she works as a scientist at BARC (Bhabha Atomic Research Centre). Shubham Kumar claims that his bank manager father kept him motivated throughout his preparation. His mother, a housewife, and his older sister, a physicist at Bhabha Atomic Research Centre (BARC), were also there for him.

Kumar, an IAS officer, is 24 years old. According to his father, he was determined to achieve his goals from an early age and was a hard worker. He didn’t give up after failing to pass the exam the first time; instead, he got back up and devoted himself totally to his preparation, achieving the highest position he desired.

Following are the marks secured by Shubham Kumar:

In the year 2020, Indian Administrative Officer Kumar achieved All India Rank 1 with an overall score of 1054. He received 878 points in the written exam and 176 points in the personality test. As an elective, he chose Anthropology. As a result, he received high scores and a high ranking on the Union Public Service Commission examination. The result was announced based on the written section of the CSE, 2020 and the group discussion or interview for the Union Public Service Commission’s personality test. Kumar, an Indian Administrative Officer, was ranked first in the 2020 examination with a score of 1054.

Shubham chose Anthropology as his optional subject in IAS. Optional Paper-I (Anthropology) (Paper-VI) received 170 points, while Optional Paper-II (Anthropology) received 150 points (Paper-VII). In the Union Public Service Commission examination, optional plays a significant part. It is recommended that you choose an optional subject that you are already familiar with and have a good understanding of. Because the grades you earn in the optional topic have an impact on your overall grade. Shubham Kumar claims that focusing on his optional subject in his third attempt helped him score higher. He also advised applicants not to pick up new books or study materials during the revision period. He used current events from newspapers to learn about the environment and science.

His Strategy for UPSC

“I gave my first try in 2018 shortly after graduating from IIT Bombay civil engineering,” IAS Kumar stated, emphasising his preparation plan for the Union Public Service Commission test. During UPSC preparations, I was not working. I shall devote my entire effort to public service.” He used certain tactics during his preparation because he was dead set on passing the exam this time. Kumar stated that Anthropology was an optional subject in his mains exams. Kumar also expressed his thoughts on Bihar, saying that the state is full with prospects and that all businesses are developing in the region.

Based on the written test and personality exam that took place in August-September 2021, around 761 aspirants were recommended for nomination. The previous year’s CSE (Prelims) was held on October 4th. IAS Shubham received the highest AIR rank of all the contestants. His commitment and hard work had paid off. The Union Public Service Commission administers the Civil Services Exam in three stages: preliminary, main, and interview, and he excelled at all three (1054 marks).

IAS Kumar stated in an interview that the development of villages, employment creation, and poverty eradication in rural areas of the country will be his top priorities. He went on to say,

“My ambition was to join the IAS since it provides a larger platform from which to work for the development of the people.” It has occurred to me that I would like to work for the poor, particularly in rural areas. My father used to push me and assist me in maintaining a positive mindset, which helped me pass the exam. Since 2018, I’ve been prepping. I couldn’t believe when I got the results today. Regardless of the role to which I am allocated, I shall give it my all.”

“Before the prelims and mains, I used to be afraid of being disqualified. I was blessed to have my friends and family’s unwavering support. I had a good study strategy and employed self-analysis to keep my preparation on track. This was a surprise to me. When my family and I first saw the rank list, we couldn’t believe it. It took a long time for us to realise what had transpired. My folks are ecstatic about my accomplishment… I intend to serve as an IAS officer in the field of rural development. If I get Bihar cadre, I’ll be overjoyed.”

In 2020, when the entire country was infected with Covid-19, Shubham was concentrating on his own preparation. He didn’t opt for any classes at the time, so he spent his time solving mock exams and test series with his buddies who were also studying for the exam. They used to trade answer sheets and double-check each other’s work.

The sole difference between an aspirant who passed the exam and one who did not is the amount of time spent studying. So, in order to attain your desired score, it’s critical to prepare effectively and efficiently.

Some tips which will help in preparing for UPSC:

Advice from Shubham to UPSC Aspirants from Rural Background:

“Where there is a will, there is a way,” according to Shubham. Regardless of their income or social standing, anyone from anywhere can be successful. In today’s world, anyone from anywhere in the country can simply acquire study materials. He used notes from Delhi’s “Kumar Book Centre.” Aside from that, the most of the information may be found on the internet. Shubham advised candidates to keep a good group of friends, which would serve as a great source of support and encouragement.

According to the young UPSC Topper, staying focused and persistent is the key to success. Shubham believes in the Power of Self-Assessment and Self-Analysis, and feels that education plays a critical role in our society, and that it should not be taken lightly. It has the ability to overcome any adversity that may arise.

Shubham wishes to work for the holistic upliftment of rural India, improving the people’s entire education and financial status. He also wants to find a way to deal with the flood issue in Bihar. In his work as an IAS officer, Shubham Kumar says he wants to focus on poverty reduction and the development of villages and their people. His ambition was to join the IAS because it would provide him with a larger platform from which to help the poor, particularly in rural areas.

Aspirants preparing for the UPSC should be consistent, hardworking, and patient, according to Shubham. Shubham believes that consistency is the key to success. Never give up hope, believe in your syllabus, put in a lot of practise time, and concentrate on your strengths. Nothing is impossible to attain in life if you put your mind to it and work hard enough. As in the case of topper Shubham Kumar, who didn’t give up after several failed tries and worked hard to earn the highest AIR rank. So simply concentrate on your studies and you might be able to pass the Union Public Service Commission exam.

How to Practice Answer Writing for UPSC CSE Mains

Nitika Khandelwal, IAS who knew how...

How to read newspaper for UPSC...