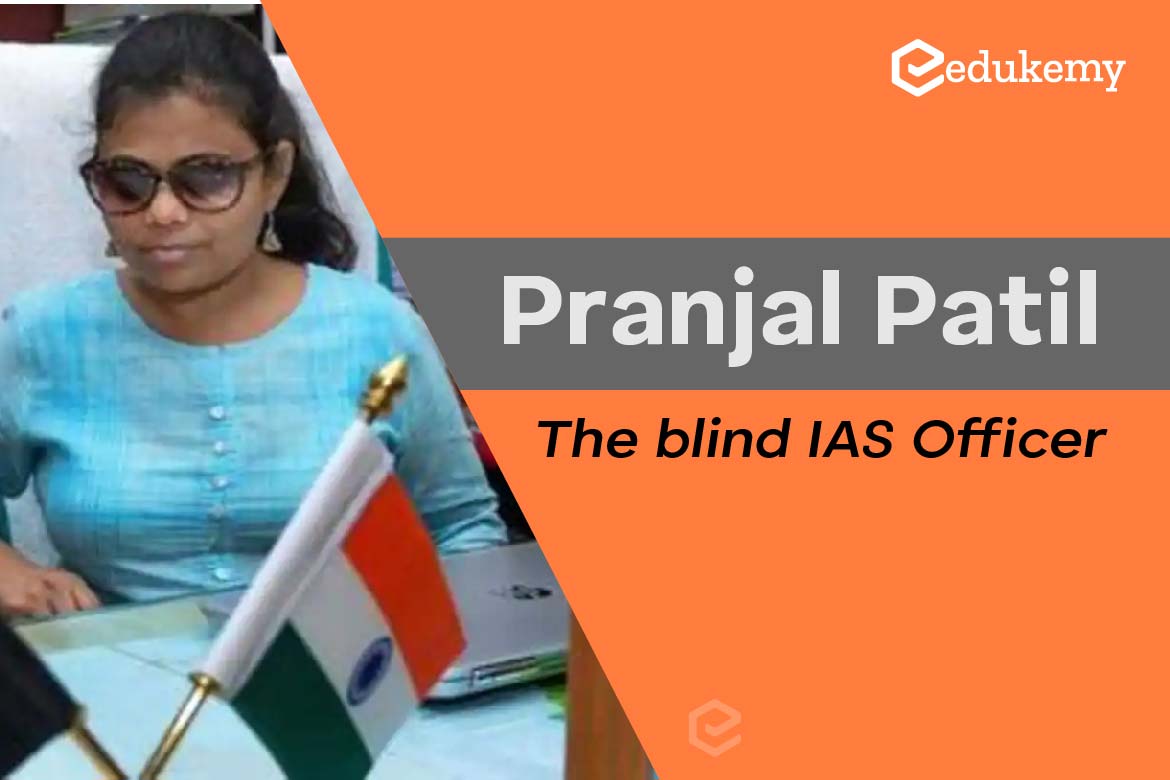 “We must never give up, we will get that one breakthrough that we are hoping for”

Imagine a person with complete loss of eyesight in this era which is technically so advanced and lots of beautiful things to be missed out.

Just imagining this, chills came through your body, right?

Well here is an extraordinary person Pranjal Patil who is completely blind yet has not stopped herself from reaching her goals.

Competing against 7-8lakhs students for India’s one of the toughest exams, UPSC exam is itself a challenge and for Pranjal the difficulty is multiplied like a thousand times as for her eyesight.

She has to compete with herself and overcome her difficulties first before competing with the vast majority in qualifying the UPSC exam.

She shows will power is everything in achieving your dream. Here is the story of the first blind female IAS Officer of India.

Pranjal Patil is originally a resident of Ulhasnagar, Maharashtra.

Her eyesight was weak when she was born and it got disoriented with time in spite of being given the best treatment her parents could afford.

She lost her eyesight completely at the age of six and since then her struggles began.

Pranjal did her schooling from Mumbai’s Kamala Mehta Dadar School which is for the blind.

She pursued her graduation in Political Science from the esteemed St. Xavier’s college.

Pranjal also did a post-graduation in international relations from Delhi’s Jawaharlal Nehru University and continued her study for M.Phil. and PhD. After doing such higher studies, she did not put herself in any sort of boundary.

She believed that sky’s the limit. So she started working towards her goal to be an IAS Officer and started preparing for the UPSC exam.

How to prepare for the UPSC exam?

Some students take classes from a coaching centre and some students do self preparation. But all students read books, solve mock papers and practice writing the answers. Is the case same with Pranajl Patil? The answer is quite obvious, no. She is not like other students, she is physically disabled, blind. So her method of preparation is totally different from other students.

Pranjal Patil did not attend any coaching classes. She used a software which used to read out the books to her. Though she did not have eyesight, she used her hearing ability at its peak. She trained her mind to function to blend in like a normal student.

For her interview, she used to hear them from different sites and attend sessions which described how to answer questions in the interview round. It was not in her nature to resist herself because of her disability, instead she used her all the other senses to overpower one difficulty to get the success she deserved.

The Maharashtrian born IAS Officer Pranjal Patil, who is the first blind IAS Officer of India has attempted the UPSC twice. Cracking this exam is not so easy as it sounds, a lot of dedication, hard work, perseverance and consistency is required.

Besides the questions being tough, there is another factor which makes this exam tougher, that is the number of students who sit for this exam every year.

Around 7-8 lakhs students give this exam every year, so naturally it becomes harder to qualify it. For this reason, maximum students take multiple attempts at the UPSC exam with few exceptions of course.

Pranjal also gave the UPSC exam more than once. First in 2016, where she ranked 744 and in her second attempt in the year 2017, she scored brilliantly with a mind-blowing rank of 124.

Getting AIR 124 takes a lot of efforts itself and Pranjal overcame her difficulties and scored such high marks has truly been an inspiration for all the candidates out there.

In 2017, Pranjal Patil scored brilliantly for which she received AIR 124. Below is the marksheet of the great personality.

The aforementioned marks have actually been scored in the UPSC exam by a person with visual impairment. Pranjal showed that there are no excuses in life. That is why she is such an inspirational figure for everyone.

IAS Officer Pranjal Patil did not achieve her goal that easily. She had tried to be part of the Indian Railways Accounts Service in her first attempt. But she was rejected from the job due to her visual impairment. She did not lose motivation though. Pranjal studied harder than ever and scored even higher in her next attempt. From 744, her rank moved higher to 124, which is purely an art of hard work and the attitude of never giving up.

As Pranjal never gave up, she fulfilled her dreams and showed everybody that dreams can be fulfilled how hard they may be and now she is an IAS Officer. IAS Pranjal Patil is currently posted in Thiruvananthapuram as the Sub-Collector.

Preparation tips from the topper to ace your.

After reading the life story of the great personality, IAS Pranjal Patil, you have already realised how to never give up in life no matter how hard the circumstances are.

How big the problem is, there is always a solution to that problem as learnt in mathematics, every problem has a solution.

IAS Pranjal Patil never made an excuse of her vision and stopped working for her aim, instead she heightened her other senses and overcame her difficulties. Pranjal faced many rejections but never stopped.

She knew that hard work always pays off, so she worked harder each time she faced rejection and came back stronger.

This is why she is a true inspirational figure for every candidate as well as non-candidates. Remember to work hard and never give up, that is all to be learnt.

What are the different optional subjects...