Home » India has immense potential for solar energy though there are regional variations in its developments. Elaborate. (250 words, 15 marks)

India has immense potential for solar energy though there are regional variations in its developments. Elaborate. (250 words, 15 marks) 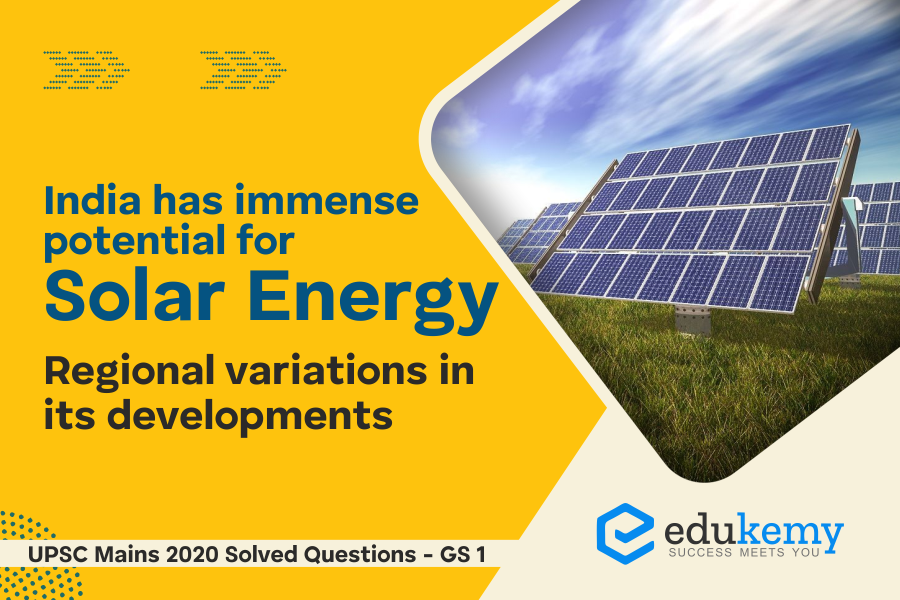 Solar power in India is a fast developing industry. The country’s solar installed capacity reached 35.12 GW as of 30 June 2020. India has the lowest capital cost per MW globally of installing solar power plants. The Indian government had an initial target of 20 GW capacity for 2022, which was achieved four years ahead of schedule. Solar energy and its potential would be significant in India’s commitment.

This can be done through Concentrated Solar Power wherein storing heat is an option. Due to better cooling of the solar panels and the sun tracking system, the output of solar panels is enhanced substantially.  One alternative is to use the water-surface area on canals, lakes, reservoirs, farm ponds and the sea for large solar-power plants. These water bodies can also provide water to clean the solar panels.

The Government of India has propelled the solar energy market with a plethora of initiatives and policies like PM KUSUM, SARAL Index, Floating solar plants in Gujarat, ISA etc. Solar energy with its low carbon footprint can be a potential substitute for conventional energy sources and would help fulfill India’s commitments under INDCs and Panchamrit proposals at COP 26, Glasgow.

Evaluate the policies of Lord Curzon...

The interlinking of rivers can provide...