Home » The process of desertification does not have climate boundaries. Justify with examples. (150 words, 10 marks)

The process of desertification does not have climate boundaries. Justify with examples. (150 words, 10 marks) 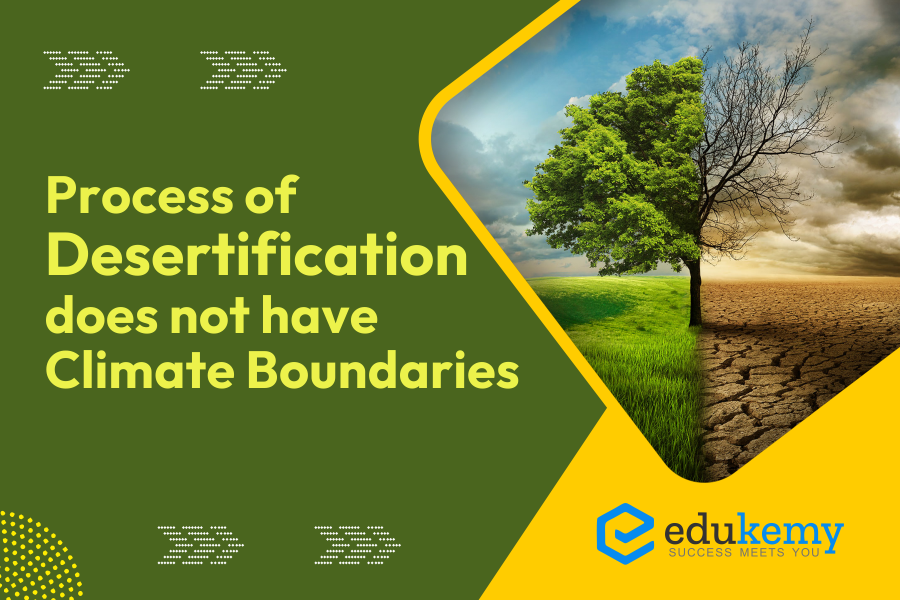 Desertification is the degradation process by which a fertile land changes itself into a desert by losing its flora and fauna, this can be caused by drought, deforestation, climate change, human activities or improper agriculture.

Activities like deforestation, extensive exploitation and grazing of grassland are loosening the soil resulting in soil erosion. Further, soil erosion is a global phenomenon that affects almost all major biomes in the world.

Urbanization is increasing at a rapid pace. Even in India, almost 50% of the population is expected to live in urban areas by 2050. As urbanization increases, the demand for resources increases, drawing more resources and leaving lands that easily succumb to desertification.

According to the Food and Agricultural Organisation (FAO), desertification affects about two-thirds of the countries of the world and one-third of the earth’s land surface, on which approximately one billion people live.

As can be seen from the above arguments, desertification and its impacts are not restricted to certain climatic boundaries. That’s why UNCCD describes desertification as one of the greatest environmental challenges of our time and it must be tackled in a holistic manner.  The UN has designated the decade from 2010 to 2020 as the “United Nations decade for deserts and the fight against desertification”. Stopping desertification before it starts requires measures to, “protect against soil erosion, to prevent vegetation loss, to prevent overgrazing or land mismanagement”.

Persian literary sources of medieval India reflect the spirit of...

Indian Philosophy and tradition played a...