Home » Do you agree that Regionalism in India appears to be a consequence of rising cultural assertiveness? Argue. (150 words, 10 marks)

Do you agree that Regionalism in India appears to be a consequence of rising cultural assertiveness? Argue. (150 words, 10 marks) 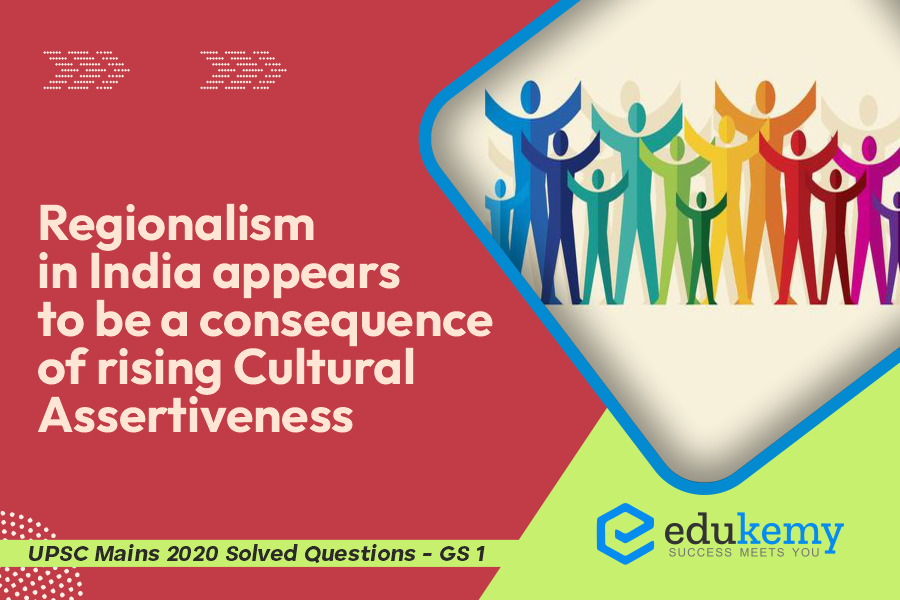 Regionalism is an inclination or a philosophy among a segment of individuals dwelling in a specific topographical space portrayed by exceptional language, culture, and so forth, that they are the children of the dirt and each chance in their territory should be given to the first however not to the outcasts.

Socio-economic and political organization of states:

The states have been incompetent to do the adequate land reforms and the feudal mentality persists. Bhoodan and Gramdan movements, after independence, were not enthusiastically carried and even land under land banks were not efficiently distributed.

The extent of infrastructural development, such as- power distribution, irrigation facilities, modern markets for agricultural products, roads, has been at backstage which can be seen in states like Jharkhand and Odisha.

Low level of social expenditure by states on education, health and sanitation:

These subjects are core for human resource development. The states those have spent heavily on these subjects, fall under the developed and advanced states, for example Tamil Nadu, where health care services in Primary health centers are benchmark for other states.

This is a source of tension and gives birth to subregional movements for separate states. Jharkhand, Chhattisgarh, Uttarakhand and recently Telangana are the result of these failures. Many such demands are in pipeline such as- Vidarbha, Saurashtra, etc. These failures also weaken the confidence of private players and do not attract investors in the states.

“Son of the Soil” doctrine explains a form of regionalism,

which has been in discussion since 1950. According to it, a state specifically belongs to the main linguistic group inhabiting it or that the state represents the exclusive homeland of its main language speakers, who are the sons of the soil or residents.

Mahatma Gandhi broadly said. “I am a proud Gujarati and a proud Indian and I don’t see any difference between the two.” If regionalism advances craftsmanship and social ethos without leaving a hand, it will bind together the country and be a fortifying variable.

India’s solidarity lies in its variety, which ought to be safeguarded and advanced no matter what, for really at that time can comprehensive improvement happen and India can develop all in all. The limits of the express that gap individuals phonetically or authoritatively are joined by one country, one constitution, and one soul and this are India that is joined by its kin, all things considered, all religions, and all districts. GOI initiatives like “Ek Bharat Shreshtha Bharat ”is to reinforce a sense of “nationhood”, identity and cultural pride among the people.

Discuss the geophysical characteristics of Circum-Pacific...