Home » Indian Philosophy and tradition played a significant role in conceiving and shaping the monuments and their art in India. Discuss. (250 words, 15 marks)

Indian Philosophy and tradition played a significant role in conceiving and shaping the monuments and their art in India. Discuss. (250 words, 15 marks) 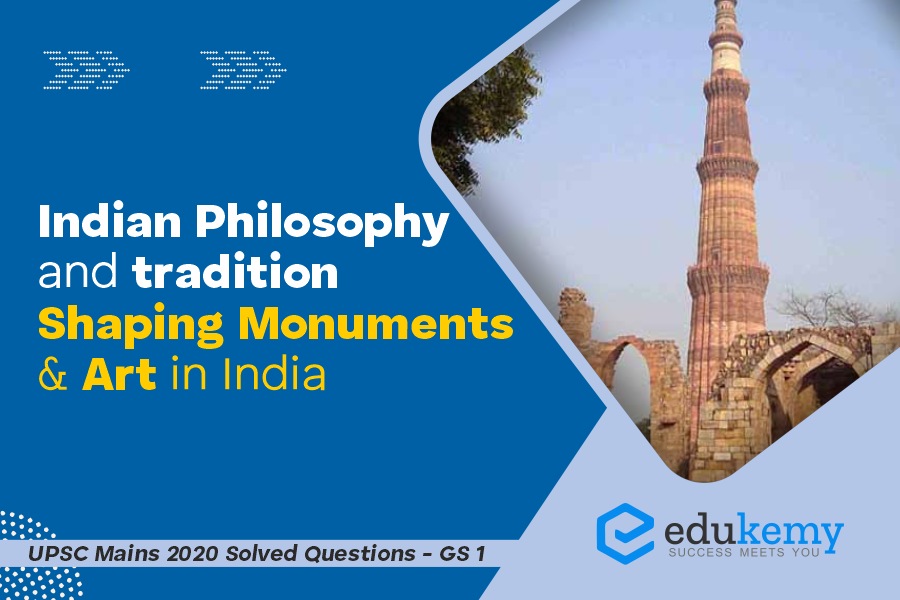 Indian philosophy refers to philosophical traditions which developed in the Indian subcontinent. It generally includes Hindu, Buddhist and Jain Philosophy, among others. In the Indian context, from the Buddhist stupa and chaitya to the Hindu temple, and then to the Muslim Mosque or the Christian church, philosophy integrated deeply with religion has stimulated the art and architecture in India.

Impact of Indian Philosophy in the Ancient Period

The excavations at Harappa, Mohenjo-Daro and several other sites revealed the existence of a very modern urban civilization with expert town planning and engineering skills.  The swastika has tremendous philosophical and spiritual significance in contemporary India. Swastika has also been found among the Indus valley diggings. According to many scholars, the popular Hindu god Siva had his origins as an Indus valley deity which later gave rise to the cult of Shaivism.

The Varna system emerged in the Vedic Age having a great influence on Indian philosophy and tradition was also evident in how things got conceived and contributed to the structural growth of cities. In Rig Veda, while most of the texts deal with rites and rituals, and beliefs and practices other parts deal with abstract philosophical concepts.  The Vedic people awed and overwhelmed by the forces of nature, ascribed divinity to fire, earth, sky, thunder, sun, dawn, dusk, etc. The most important feature of the Vedic period was the making of fire altars which soon became an important and integral part of the social and religious life of the people even today.

Engravings, paintings, or sculptures of theses caves depict the teachings of these philosophies. For example, the ceilings of Ajanta caves have paintings showing the life cycles of Buddha, Ellora caves contain images of 24 Jinas.

The Ashokan Pillar, the Stupas have been influenced by the Buddhist philosophies depicting teachings, stories, symbols associated with Buddhism. The Chakra of Sarnath’s pillar symbolizes Dharmachakrapravartana and the Chattra of stupas embodies the Three Jewels of Buddhism.

From the Gupta period onwards, Hindu temple architecture began to evolve. Constructed mainly in three distinctive styles, Nagara, Vesara, and Dravida, the architecture and walls of Hindu temples are influenced and embellished with sculptures influenced from Hindu epics and mythologies. The Khajuraho temple’s territory is laid out in three triangles that converge to form a pentagon to reflects the Hindu symbolism for three realms or Trilokinath, and five cosmic substances or Panchbhuteshvara.

Pallavas and the Cholas:

When the Pallavas and the Cholas reigned, there was a tradition where the temple used to be the central place in a village for societal communication. They extensively developed the tradition of building temples, for example, the ‘ratha’ at Mahabalipuram style of temples, structural temples such as the Kailashanath and Vaikunthperumal temples by the Pallavas.

Impact of Indian Philosophy in the Medieval Period

Mughal Emperor Akbar’s Dīn-i-Ilāhī known during its time as Tawḥīd-i-Ilāhī (“Oneness of God”) or Divine Faith, intending to merge some of the elements of the religions like Islam, Hinduism, and Zoroastrianism, Christianity, Jainism, and Buddhism. The synthesis between different cultures gave birth to new philosophical and religious traditions, ideas, forms and styles in almost all spheres of culture.

Impact of Indian Philosophy in the Modern India

During the British colonial period, European styles including neoclassical, gothic revival, and baroque became prevalent across India. The amalgamation of Indo-Islamic and European styles led to a new style, known as the Indo-Saracenic style.

The Indian philosophy and traditions have been a predominant factor influencing the architecture and interiors of the monuments. But, the monuments were not solely shaped by philosophies and they have incorporated activities such as trade or cultural interaction. The above examples show how people from different phases were keen to manifest and impart their traditions, values, and beliefs of Indian philosophy through art, monuments, which helped to pass the knowledge through generations and through different styles.

India has immense potential for solar...