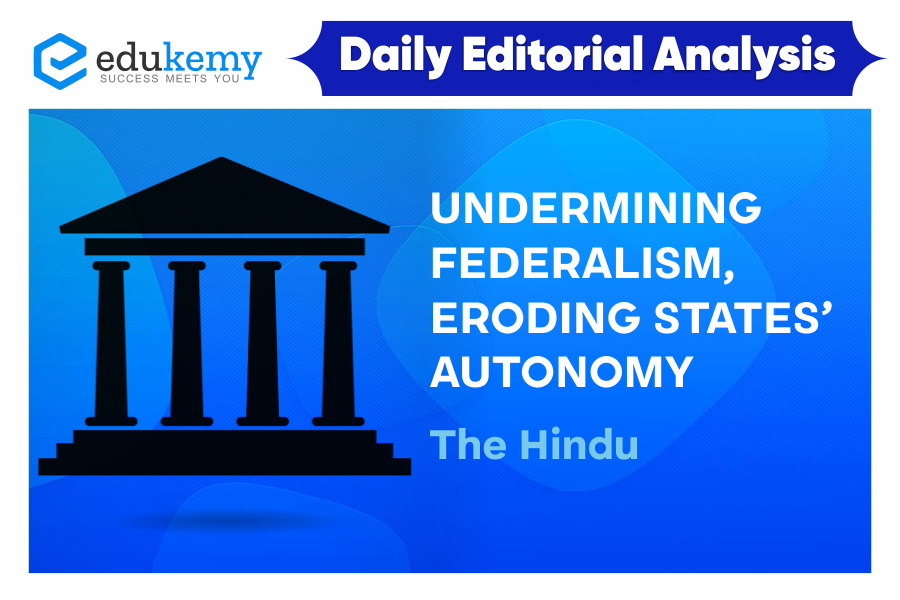 Functions and responsibilities of the union and the states, issues and challenges pertaining to the federal structure etc

Rather than strengthening cooperative federalism, the central government of the day is resorting to policies that make the Indian federation coercive.

Federalism is a system of government where the powers are divided equally between the Centre and its various parts, including provinces and states. Federalism is one of the pillars of the Basic Structure of the Constitution.

The Planning Commission was replaced by NITI Aayog in 2015 with an emphasis on the ‘Bottom –Up’ approach and to achieve Sustainable Development Goals (SDGs). One of the main mandates of NITI Aayog is to foster cooperative federalism through structured support initiatives and mechanisms with the States continuously, recognising that strong States make a strong nation.

Different Committees appointed by the Government of India emphasized the need to curtail the number of Centrally Sponsored Schemes (CSS) and restrict them to a few areas of national importance. The Sub-Committee of Chief Ministers appointed by NITI Aayog has recommended a reduction in the number of schemes and the introduction of optional schemes.

The COVID-19 pandemic has taught us that individual efforts are not enough to tackle national exigencies, and there is a constant need to strengthen and renew the cooperative spirit of Indian federalism.

The centre and state should work together in accordance with their constitutional mandates, with greater autonomy for states. After all, a stronger nation results from these stronger states.

Daily Newsletter – Get all your Current Affairs Covered – Click Here

How to prepare for UPSC Interview

UPSC GS Paper-I (2022) B ANSWER KEY ALONG WITH EXPLANATION