The interlinking of rivers can provide viable solutions to the multi-dimensional inter-related problems of droughts, floods, and interrupted navigation. Critically examine. (250 words, 15 marks) 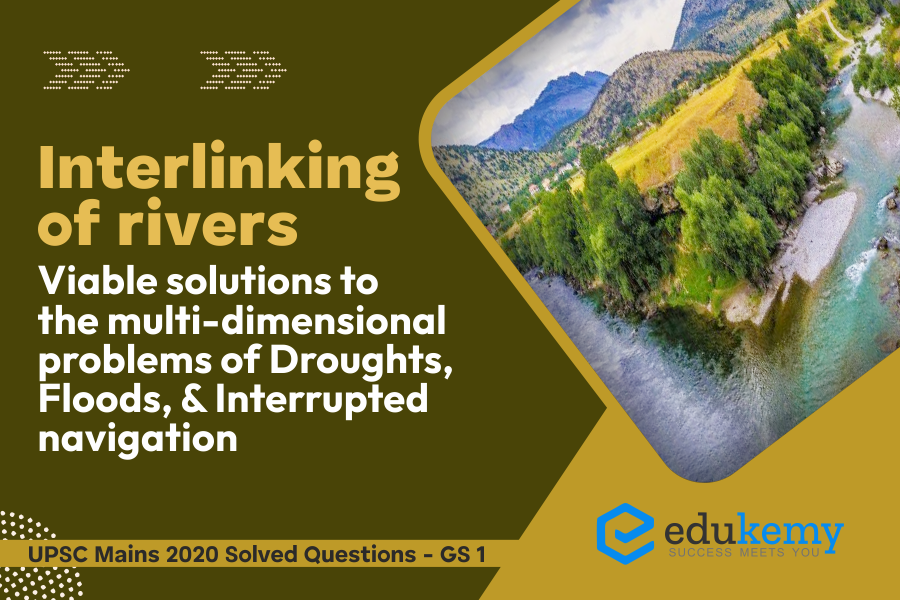 Interlinking of rivers envisions transferring water from water ‘surplus’ basins where there is flooding to water ‘deficit’ basins where there is drought/scarcity through inter-basin water transfer projects. The northern plains of India are endowed with surplus water due to the presence of perennial rivers originating from the Himalayas. Southern and western India generally witnesses drought, as this region is drained by seasonal rivers whose water level largely depends on the Indian monsoon. It is designed to ease water shortages in western and southern India and aims to link 30 major rivers.

Benefits of the Interlinking of Rivers

It would generate additional hydropower, which will help India fulfill its commitment to the Paris Climate Deal. The river interlinking project claims to generate a total power of 34,000 MW (34 GW). It will lead to ground water recharging.

Round the year Navigation:

As it would address the low levels of water in southern India’s rivers, it would provide around year waterways connectivity. This will reduce the cost of transportation & levels of pollution and help in economic development.

Interlinking of rivers will increase the country’s total irrigation potential, preventing some of the surface runoff into the sea. It will most likely lead to enhanced and expanded irrigation i.e., the project asserts to provide additional irrigation to 35 million hectares in the water-scarce western and peninsular regions.

Render employment avenues for more than 10 lakh people for the next decade. The inter-link would generate a path for aquatic ecosystems to migrate from one river to another, which may give livelihoods to the people who depend on the fishery as their income.

Associated Concerns with Interlinking of Rivers

Perennial Rivers Are Not So Perennial:

A new analysis of rainfall data reveals that monsoon shortages grow in river basins with surplus water and falling in those with scarcities.

The spirit of federalism is ignored in the river interlinking project.
Historically, there has been dissent on the part of the state governments regarding water sharing. For example, as evident from the ongoing disputes on rivers like Cauvery, Mahadayi.

The interlinking of rivers project, which is of a subcontinent magnitude, would harm many ecological factors like delta formation, growth of mangroves, and aquatic life. It will result in huge diversion of forest areas and submergence of land heading to deforestation and soil- erosion. For example, The Ken-Betwa link project lays in danger over 4,100 hectares of forest land or 8% of the Panna National Park)

As per Geological Survey of India, this project is of massive, estimated cost, a long-term planning and a sound financial simulation are needed to meet the standard for such proposals. The huge expenditure of the project and the maintenance costs linked with the dams, canals, tunnels, and captive electric power generation will involve huge financial burdens.

Reconstruction and rehabilitation due to displacement is not an simple task as seen before. The construction of reservoirs and river linking canals in the peninsular component alone are expected to displace more than 5, 83,000 people and submerge large areas of forest, agriculture and non-agriculture land.

Interlinking of rivers has its pros and cons, but given the economic, political, and environmental implications, it may not be a wise decision to carry out this project at a centralized national level. Instead, interlinking of rivers may be pursued in a decentralized manner, and more sustainable ways like rainwater harvesting should be promoted to mitigate floods and droughts. Indeed, it is the need of the hour to have a water mission like IRL, which will enable availability of water to the fields, villages, towns and industries throughout the year post a comprehensive scientific assessment.

The process of desertification does not...

Is diversity and pluralism in India...